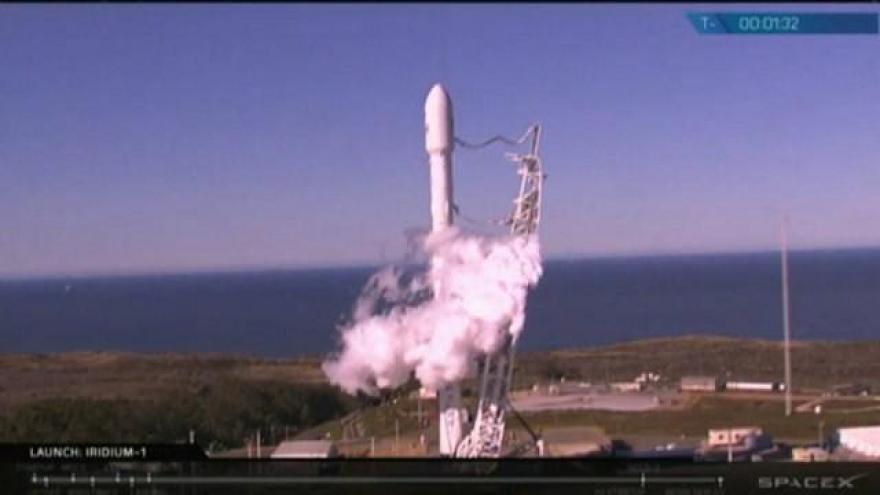 By Azadeh Ansari and Jackie Wattles

(CNN) -- SpaceX returned to flight on Saturday after a four-and-a-half-month hiatus.

The private space exploration company -- headed by Tesla CEO Elon Musk -- took off from Vandenberg Air Force Base in California at 9:54 a.m. PT, aiming to take 10 satellites into space for voice and data company Iridium.

It marked the company's first launch since a Falcon 9 rocket exploded at Cape Canaveral in September.

The launch's success was made even sweeter by a smooth return landing for the Falcon 9 rocket's first stage booster. It safely returned from space and glided to a landing on a seafaring platform, known as a droneship.

SpaceX -- along with rivals such as Blue Origin from Amazon founder Jeff Bezos -- has been attempting to perfect the rocket landing.

Because rockets are worth tens of millions of dollars, and they have historically been discarded after launch, mastering the landing is key to making space travel more affordable. Saturday's launch marks the seventh time SpaceX has successfully landed a rocket.

The primary mission Saturday was to deliver 10 Iridium satellites into orbit. Iridium is using the satellites to develop a revamped voice and data communications network, dubbed NEXT.

About 80 Iridium NEXT satellites are scheduled to be deployed, and SpaceX is committed to carrying at least 70 of them. Iridium says the NEXT satellites, delivered to low Earth orbit, are designed to provide "real time connections between people, organizations and assets to and from anywhere."

Iridium says NEXT "will replace the world's largest commercial satellite network of low-Earth orbit satellites in what will be one of the largest 'tech upgrades in history.'"

SpaceX's high-anticipated launch Saturday was initially scheduled to launch on Monday, but flight plans were canceled because of high winds and rain.

In September, a rocket carrying a satellite to be used by Facebook to bring Internet access to remote areas of the world exploded while awaiting launch.

Facebook is in a partnership with French satellite firm Eutelsat Communications. The satellite, called Amos 6, was owned by Israeli company Spacecom.

Earlier this month, a probe into the cause of the blast concluded that a failed pressure vessel in a liquid oxygen tank was to blame for the failure.