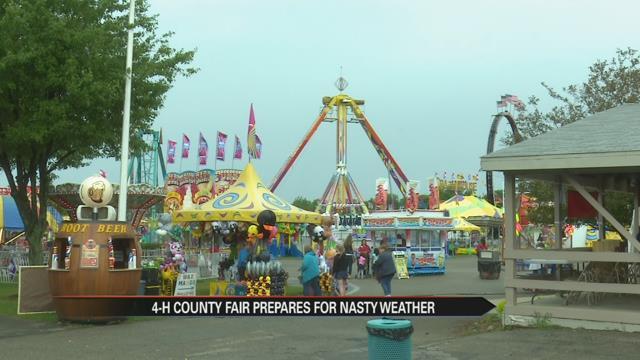 St. Joseph’s 91st 4H Fair is underway, but is under the threat of severe, or at the very least, ugly weather.

Typically, more than 100,000 people flock to St. Joseph’s 4-H Fair each year. This week, there’s some rain on the radar.

Luckily for 4-H and vendors, that won’t keep everyone at home.

Katherine Bryant has been attending the fair for 35 years.

“If I plan to come, I usually come no matter," Bryant said.

“It doesn’t rain at the fairgrounds," Caldwell said.

At least, that’s the mentality he’s adopted for the week.

“Once the skies part today, folks will come out," said Caldwell.

That’s good news for food vendors, like Stacey Reed. Her business, “Fire in the Hole” wood fire pizzas, depends entirely on big events like this one.

“It’s the blood of our business. I mean, that’s just what we do," Reed said.

Reed says for them, rain can actually bring in more customers.

“Sometimes that’s why we do a little better is because we have a little awning that we can duck under," Reed said.

Reed says it probably also helps that they have a fire where people can warm up.

A ‘place to duck under’ is definitely part of a veteran fair-goer’s stormy weather plan.

“Usually if we know it’s going to be raining, we stay close enough to where we can just run into one of the buildings," Bryant said.

If a huge storm hits, 4-H has you covered.

“We have an emergency preparedness plan in place. You name it, it covers it. From evacuations to a fire or explosion. A lost child. We have everything under the sun covered," Caldwell said.

Rain or shine, the 4H Fair goes until July 9.