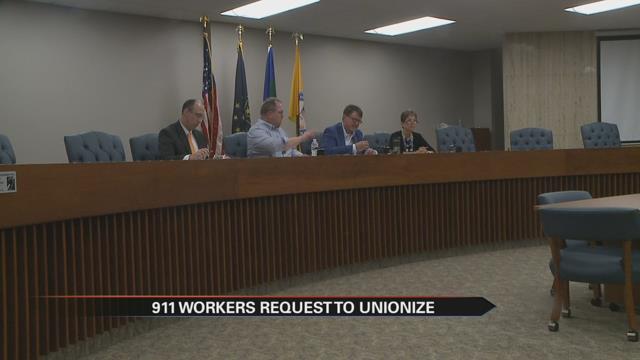 Some employees of the St. Joseph County 911 dispatch center are working to unionize.

Frustrated employees spoke out at the commissioners meeting Tuesday morning to make their plans to join the union clear.

They say they’ve been overworked and understaffed.

Julie Studon has worked for dispatch for the past eight years as an assisting supervisor.

She also enjoys it.

“I love my job. I love helping the community,” Studon said.

But in the past year, after St. Joseph County, Mishawaka  and South Bend’s 911 centers  were combined, Studon says her job has gotten a lot more difficult.

“I have already worked 320 hours of overtime this year on top of my 40 hour schedule. I work all shifts. Back and forth, eight hour turn arounds,” Studon said.

Studon is not the only one feeling the growing pains.

They asked the St. Joseph County commissioners to recognize their membership in the American Federation of State County and Municipal Employees.

The commissioners say they aren’t ready for that just yet, because the employees haven’t officially joined the union.

The employees still need to vote on it within 45 days.

“There may be a way of redesigning things or redoing things that they may not have to join a union,” Commissioner Deborah Fleming said.

In the meantime, many employees say they’ve already made up their mind.

“We want everyone to know that this is what we’re doing. That we’re coming together as a team, and trying to make a difference and have our voice be heard,” Studon said.