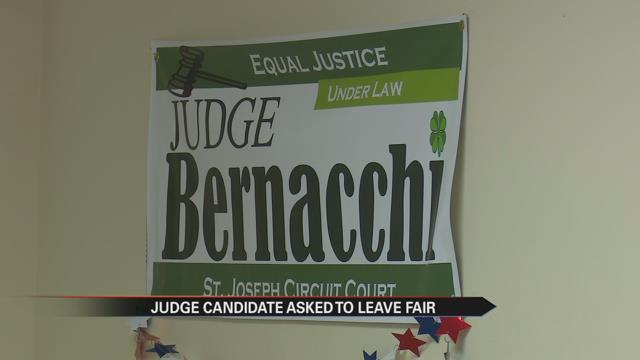 The St. Joseph County GOP is apologizing for the actions of one of their candidates.

Doug Bernacchi, a candidate for 60th circuit judge, is making headlines after allegedly making a scene last week at the fair.

Officials say it started with some sort of disagreement between Bernacchi and someone else at the Republican booth.

He went on to condemn any offensive comments made by Bernacchi.

“Any comments made by the candidate in person or online are not a reflective of the party,” Saenz said.

Stories vary on exactly what happened, but Saenz says Bernacchi was screaming and being rude to another worker at the booth.

Bernacchi was asked to leave his booth, not by the fair, but by his own party.

“This type of behavior will not be tolerated,” Saenz said.

The St. Joseph County Republicans are still endorsing him, though.

When ABC 57 reached out to Bernacchi Wednesday, he replied with a text.

“Doug is working as a lawyer until labor day, serving his clients. He is not available. When elected he will be fair. No pun intended!!” the text reads.

A follow up question in a text message wasn’t answered.

Bernacchi also posted to Facebook Friday, saying ‘the fair is not a good place for family or children’.

Saenz says the rest of the party disagrees.

“We anticipate folks enjoying their experience at the fair,” Saenz said.