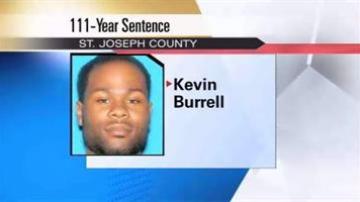 ST. JOSEPH CO., Ind. -- A man is facing a 111-year sentence, partially because of his gang activities.

St. Joseph County Superior Court Judge Roland Chamblee handed down the sentence against Kevin Burrell who was convicted of two counts of attempted murder stemming from an October 2011 case.

Police said Burrell was also one of the three men who tried to rob retired police officer Lt. John Collins Jr. at his home in November of 2011.

In court, on Wednesday,  Ken Cotter, St. Joseph County Chief Deputy Prosecutor said,  Judge Chamblee sentenced him to six years for his involvement in that case in combination with Burrell's probation violation penalty.

But the other 105 years of his sentence comes from October 2011 when the 23-year-old man shot two people through the front door at a house party in the 1200 block of VanBuren Street.

Burrell and his friends stopped at the house because they wanted to attend the party. A party where they did not know the people who lived there nor who were in attendance. The prosecutor's office said Burrell started yelling he was with the Cash Out Boyz through the front door before he opened fire. Bullets from Burrell's gun hit two brothers who were inside the residence.

"This is pure and simply a 'thank you' from not only our office, as the prosecutor's office, but as a member of this community, that these detectives put these cases together, so these individuals can be taken off the street," said Ken Cotter, St. Joseph County Chief Deputy Prosecutor.

Cotter explained after the jury found Burrell guilty last month they reconvened to address the last charge gang enhancement, a charge they did not know was coming. In gang enhancement cases Cotter said, "they reconvene, listen to more evidence to determine whether or not the person in committing this felony did it in the direction of or in affiliation with a criminal gang."

The South Bend Police Department announced more than a dozen other members of the Cash out Boyz gang are currently locked up. Many of them awaiting trial for other violent crimes in the area. Prosecutor Mike Dvorak said several of these cases are federal.

At a news conference on Wednesday Dvorak commended a handful of South Bend Police Department Detectives who for the past year work jointly with the a handful of prosecutors to connect the dots on the Cash out Boyz and the crimes they commit.The five detectives that received recognition are as follows: Jennifer Gobel, Gene Eyster, Meredith Hanley, Chris Kronewitter & Anthony Pearson.