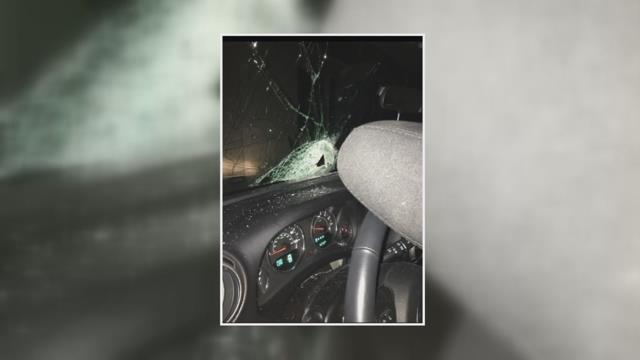 Saint Joseph County police are investigating a series of rocks being thrown into windshields.

One victim, Erica King, was just driving through her neighborhood late Saturday night with her two-year old daughter, Reagan in the backseat.

“I was driving and I see something come from my left hand side,” said Erica King, who was driving through the intersection of Juniper and Darden Road.

Suddenly, her windshield shattered right in front of her eyes and her and her daughter were covered in glass.

“What? Like what just happened here. I mean I’ve never had something like this happen to me before,” Erica said.

The next morning, Saint Joseph County Police found a giant landscape rock in the back of her Jeep.

King’s is just one of four incidents. Police say three other similar reports came in, an unknown object being thrown at a vehicle, causing severe damage.

Two incidents occurred both on Saturday and Sunday evening. Two were near the intersection of Darden Road and Juniper. The other two cars were hit in the area of Brick and Laurel Road.

Police say the suspect’s vehicle is described as a light colored sport-utility vehicle. Anyone with information should contact the Saint Joseph County Police Department.