St. Joseph High School wins the war by the shore 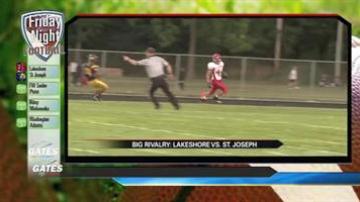 The game started with several incompletions and there were two blocked field goals in the first half.

Senior running back Justin Gambrell was on fire and plowed his way to the goal line for several touchdowns.

Seconds later Gambrell gets a taste of his own medicine from Lakeshore’s #44 Sam Effa who scores an eighty yard touchdown using his impressive speed.

The score at halftime was 23 to 6 and the Lancers fans had smoke going everywhere.

In the second half Mason Shinrock runs a beautiful route, catches the ball, and propels his right hand across the goal line for a touchdown.
Share this article: