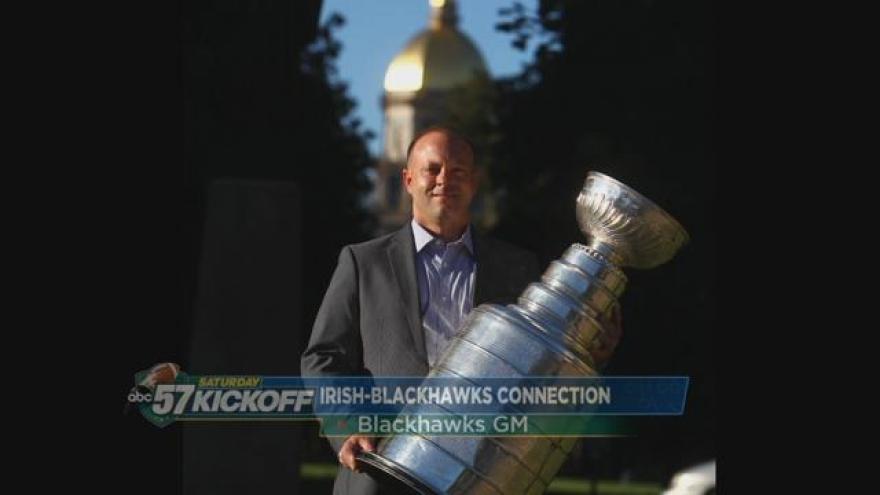 Stan Bowman, General Manager of the Chicago Blackhawks, was born into a hockey family. His father, Scotty Bowman, won 14 Stanley Cubs as a player, coach and executive. Sometimes family, business and athletics come together to help achieve the ultimate level of success. And a little luck of the Irish doesn't hurt.

In 2010, Bowman hoisted the Stanley Cup as the youngest General Manager in NHL history. It's all part of his story that started at Notre Dame about two decades earlier.

"Whether you're achieving in your field, which is athletics or that's in business.  I think the one thing is you're driven to be achievers and I think you're instilled a work ethic at Notre Dame."

He was born Canadian, raised Catholic, and by the age of twelve he knew he wanted to be Irish.

"I fell in love with it right away and it was sort of my goal to someday make my way there. So I worked my way through high school got in and here we are now."

In 1991, Bowman's dream came true as he entered his freshman year at Notre Dame. He moved into Keenan Hall and submerged himself into college life.

"I was into sports quite a bit. Obviously hockey. I wasn't good enough to play on the varsity team, but they had intramurals, club team," said Bowman.

Bowman has taken his love of hockey back to the university.

He brought the Blackhawks to Compton Family Ice Arena for training camp back in 2010 and again in 2015.

"I think it's the nicest facility in the country in terms of the amenities the players have. Our players loved it. It was a great way to kick off the year and start as a group and you know it's been successful for us and we hope to continue to do it," Bowman said.

There's something to be said for the luck of the Irish. Both years his teams won the Stanley Cup.

His love for Notre Dame has spread to his own family. Will he persuade his children to attend Notre Dame?

"I'll let them make their choices but I know that they are, I think they think they're going there. They're getting to that age now, that they know you don't just go somewhere because you want to go there, you have to actually be chosen to go and have really good academics. But as little kids they certainly are huge fans of Notre Dame. I've taken them to a lot of sporting events there, football and hockey games there and taken them all over campus," Bowman said.

If his kids do end up at Notre Dame, he hopes their experience will be as successful as his.

"It's sort of the most important time in your life, it's sort of cliche but you go in as a kid and come out a man. You really do a lot of maturing in those four years and you become the person you are today," Bowman said.

The two have worked together, sharing strategies and ideas for what it takes to win championships at Notre Dame and in the NHL.