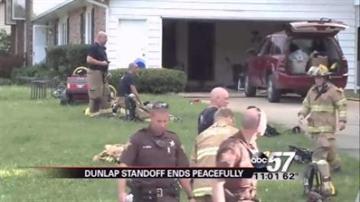 DUNLAP, Ind.-- After a four hour standoff in Dunlap the suspect surrendered peacefully and no one was hurt.

After the suspect surrendered, the Green Valley Estates neighborhood returned to normal.

A mother and her two year old escaped a dangerous standoff that unfolded inside their Dunlap home.

It started with a domestic dispute with her boyfriend, 36 year old Richard Doerscher Jr.

Captain Bradberry of the Elkhart County Sheriff Department said, “We were able to get a hold of the female victim and she had a child with her. They were both able to get out of the home before the subject barricaded himself in the home.”

Captain Bradberry said Doerscher wouldn't come out of the home when police arrived.

Neighbors were forced to watch from windows and lock their doors as police tried to coax him out.

Darrel Tafinger and his wife have a small day care across the street.

Darrel Tafinger said, “They didn’t know a thing about it because we didn’t tell them, and in fact when all this happened they were sleeping.”

The parents were anxiously waiting for the standoff to end so they could be reunited with their children.

Tafinger said, “The parents were very concerned. We didn’t know what was going to happen.”

Police say Doerschertried to set the house on fire, but crews put it out.

After four tense hours, it ended with a peaceful surrender.

Doerscher is now in the Elkhart County Jail charged with domestic battery and resisting arrest.