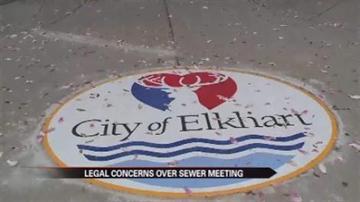 Dave Schemenauer is one of the 63 business owners currently signed into the Elkhart sewer compact still waiting for a negotiated fee from the city of Elkhart.

"Every step of the way, every meeting, we talk with them and now that action is about to happen, they say we're going to handle this and the mayor steps in and says no, I'm going to choose how this will be handled,” said Schemenauer.

Moore assigned a 16 person task force that has a year to reach a compromise over sewer fees.

Despite state law, the meeting was closed to the public.

"The committee has been appointed by the mayor therefore it becomes an extension of the mayor's authority and therefore it has to comply with the Open Door Law,” said Dale Brewer, paralegal for Indiana Public Access Counselor.

Schemenauer says he will begin using new techniques to get his message across.

"Screaming, shouting, posting signs. Those are lousy ways to run a city, but the mayor isn't leaving any other option,” said Schemenauer.