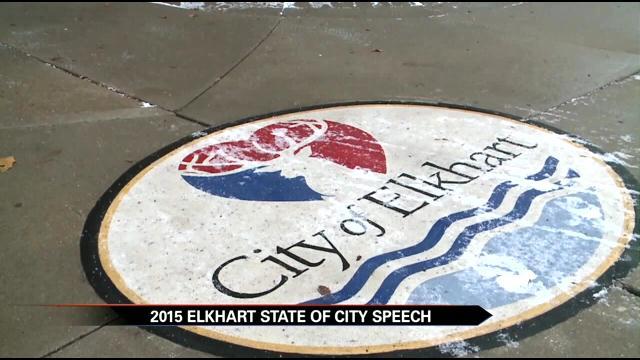 Elkhart Mayor Dick Moore gave his annual “State of the City” address at the Lerner Theatre on Wednesday.

He touched on topics of economic development, communications and public safety.

It was a pretty technical speech.

The basic point that Mayor Moore stressed is that all 157 of the city's accounts maintained a positive balance at the end of 2014.

He said the city continues to move out of the economic downturn from 2008, but the biggest takeaway from the speech was the safety of residents and how his administration plans to make that happen.

The outside of the Lerner Theatre may have looked calm and quaint, but once residents walked through the doors they heard Elkhart Mayor Dick Moore get passionate about a problem he wants fixed in his community.

“We must be able to take our visitors through any neighborhood, not just a few,” said Moore.

He wants everyone to feel safe in any neighborhood and said it starts with fighting crime.

He believes it is a problem with a simple solution.

“In the near downtown neighborhoods, some of them are pretty dark; those are where some of our problems are. I'd like to move there first with LED lighting. Low cost lighting is a deterrent to crime,” said Moore.

He said he will seek a study on the cost of LED lighting, the same lights that have already been placed in downtown Elkhart.

Another solution is manpower.

“We're going to have to hire more police officers in Elkhart,” said Moore.

Mayor Moore said it should be easier once they can submit a proposal to pay officers more money.

“Looking at our wage scale and benefits package, for all in public safety, when we get some additional tax money in, we'll have to look at that as well,” said Moore.

With those officers, Moore said the ongoing debate of body cams must be resolved.

He said the city of heart has traditionally been a leader in using new technology, not a follower.

Something he does not want to see change when he starts talking about vest cams.

The mayor had a strong message for those who commit crimes in the city.

He said no one has the right to take another's life, that too many in the city act as the higher authority and that has to end.
Share this article: