State officials stepping in to help with E.Coli investigation 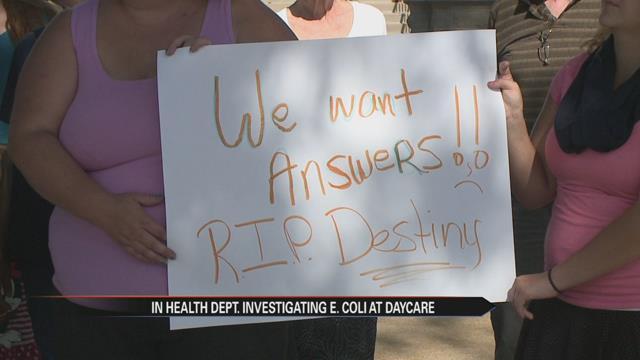 The Indiana State Department of Health is sending a team to Fulton County to find the source of a possible E.Coli problem.

The family of 9-year-old Destiny Smith said she died last week from an E.Coli bacterial infection.

At this time, the state health department said it's too soon to tell if Smith's death is connected to 5 other suspected E.Coli cases.

Officials said out of the 5 cases, 2 are confirmed in Wabash and Fulton counties.

Schaeffner said, “Our daughter went from what we thought was the stomach flu, to being gone in less than 48 hours, so parents are terrified.”

Schaeffner said Smith was a vibrant daughter who would light up a room.

Her parents aren't pointing fingers, but they want other parents to be careful.

Schaeffner said, “It’s no one’s fault, we just want answers to save anybody else who may have to go through this.”

Laurie King said, “We don’t want a band-aid on it! We don’t want, 'Well it came from this daycare.' It had to come to that daycare somehow!”

King is upset because health officials in Fulton County said a daycare is being investigated in connection to the infection.

Also at the demonstration was Kendra and Kyle Creighbaum, a Rochester family who said their two sons were suffering from an E.Coli infection in May.

Creighbaum said, “All of the emotions down at Riley (hospital) that we experienced started flooding back when I heard another child was down for the same condition my boys were.”

Tucker and Hunter Creighbaum are twins, and they have both recovered from their infections.

Doctors told the family their sons may have eaten raw chicken at a restaurant.

At this time, the state cannot connect the cases.

Jennifer O'Malley is the director of public affairs for the Indiana State Department of Health and she said they will not be naming the daycare that's being investigated at this time.

O'Malley said, “We don’t have any confirmation in the case of the patient who died that would give us conclusive evidence to indicate that it would be related."

Health officials recommend washing your hands and not handling livestock until they identify a source.