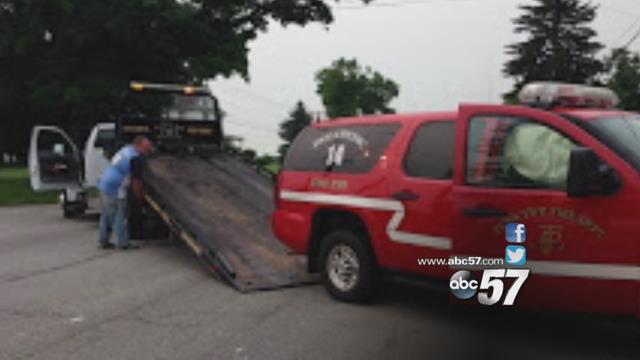 One first responder is thankful to be unharmed  after a scary accident on Tuesday between his SUV and  a semi.

David Yoder, an EMS Division Chief said, "I was on my way to a meeting, I stopped at the intersection, proceeded forward and was struck by a semi."

The crash happened at the intersection of State Road 331 and Kern Road. Fortunately, both drivers weren't going very fast as they approached the stop sign.

"He was carrying a light load and he wasn't going very fast so he was able to slow down and veer off to the left which was a glancing blow rather than a direct hit. But it still pushed the car around. I had no control and just got that lucky by missing a telephone pole," said Yoder.

This latest crash is just one of dozens that have happened at this intersection over the years.

"Even though there's signs posted down to the south and the north also, flashing lights and the stop signs, it's just people are unfamiliar and in a hurry and then we have the accidents," said Yoder.

When we posted the news of the crash to our Facebook page, a viewer commented, "that intersection is a hot mess and needs a stop light. Especially with the school there."

Yoder said, "The young gentleman who lives in the house over here he has been on multiple scenes most of which I've been on where it's the same scenario."

This intersection was the site of more than 74 accidents since 2006.

"I could've ended up in the cemetery. Literally," said Yoder.