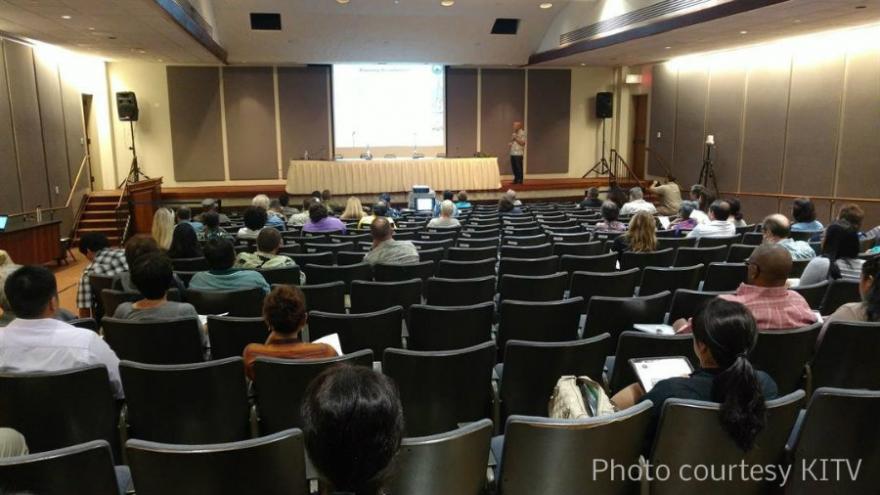 HONOLULU, HI (KITV) -- An informational meeting was held Thursday to brief the public on preparations and instructions in the event of a foreign attack.

Hawaii residents voiced their concerns over the possible fall out from a potential missile attack from North Korea on the state.

"As the Cold War died, as the iron curtain came down, the Soviet Union turned into Russia, the funding went out and these shelters were not maintained again," Vern Miyagi, the HI EMA administrator said.

With improving technology and constant threats from North Korea, State officials say the best option to stay alive during an attack is the action you take right now.

"What we're doing here today is launching a series of events to talk to the public and we want the public to say come out and talk to my group," Toby Clairmont, HI EMA administrator said.

The Hawaii Emergency Management Agency says in the event of an attack - you need to have 14-days worth of supplies like water and canned goods.

They also urge the public to stay updated on what push alerts through TV, Radio, Smart phones and sirens mean - because if a missile were to touchdown, chaos would be imminent.

"Yes, the guard is coming. Yes law enforcement is coming. But we may not get there. In fact, immediately. Because many of us live in this community and are victims too," Maj. General Joel Logan with Adjutant General Hawaii said.