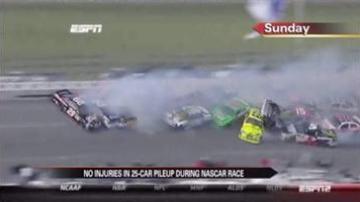 TALLEDEGA, Ala. -- It is the cost of trying to get a win.

Tony Stewart, car number 14, was trying to race his way to victory in Sundays NASCAR race at Talladega speedway during the final lap.

But instead, Stewart was the start of a massive wreck at that involved in 25 cars.

Stewart after the race said he felt horrible about what happened and apologized.

"I was trying to win the race and stay ahead of Matt," Stewart said. "It was a mistake on my part, but it cost a lot people a bad day because of it."

No driver was hurt in the crash. Nine drivers were checked out by doctors were checked as a precaution and later released from the infield care center.