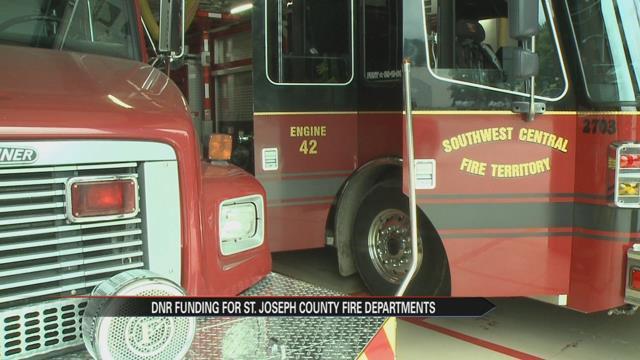 Three St. Joseph county fire departments received thousands in federal money Thursday morning. These departments will use the money on helmets, boots and gear that will make a fire fighters job much safer.

Some fire departments didn't expect to be the ones to receive the Department of Natural Resources grant, allowing ABC57 to break the news.

"No," said Dale Wedel Fire Chief at SW Central when asked if he knew. "And thank you very much for the surprise!”

These grants go anywhere from $575 to five grand! And it’s money that won’t be put to waste since equipment and gear for these firefighters is very expensive.

The DNR award works as a match fund. They work to match up to $5,000 of whatever it is the department is looking to improve or get more of.

So if a fire department puts in a project for $10,000, the DNR could potentially cover half of that expense.

Applications are available on the DNR website, but there’s effort that has to be put forth.

“What our fire department does is they work aggressively to try and find revenue sources other than tax dollars,” said Steven Downey, the township trustee at Warren TWP FD.

After departments across the state submit the application they have to just stay positive.

“You kind of hope that somewhere along the line, after their fiscal year, that you get awarded,” said Wedel.

These grants make a significant change because gear for firefighters is pricey, but this allows for new opportunities.

“We have three new ones coming up, they’re in classes right no," said Jerry Knepp a firefighter at Liberty Township FD. "So this will give us an opportunity to give them three new sets of gear.”

Three new firefighters will be better equipped at Liberty Township Volunteer Fire Department thanks to this DNR award.