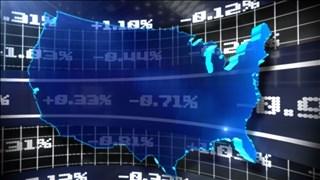 Overnight, there was a knee-jerk panic in global markets as it became clear Trump was about to pull off a stunning upset by defeating Hillary Clinton, Wall Street's favored candidate. Dow futures plummeted nearly 900 points at one point as investors expressed fear about the inherent policies brought on by a Trump White House.

But a sense of relative calm returned to the markets by the opening bell on Wednesday morning. The Dow moved between minor gains and losses, while the S&P 500 and Nasdaq were down only slightly.

This is hardly the freakout many anticipated. Market strategists said the lack of a panic is due in part to Trump's victory speech, which raised hopes that he will focus on policies that can help the economy and not follow through on some of his extreme campaign positions.

"The rhetoric that was talked about on the campaign trail was pretty scary. The nationalism and protectionism," said Art Hogan, chief market strategist at Wunderlich Securities.

"But there's a big difference between what you say campaigning and what you do as president," Hogan said.

Still, it's clear that global markets are on edge. Asian stocks fell sharply, led by a 5% plunge for Japan's Nikkei 225 after Japanese finance officials held emergency talks following the results. European markets also slumped initially, before recovering and are mostly in the green now.

The Mexican peso plummeted over 11% at one point to a new all-time low against the U.S. dollar. Top Mexican finance officials said they would take steps to shore up the peso, but failed to lay out concrete details.

Trump's tough talk on trade with Mexico is seen as a direct threat to the Mexican economy, which depends heavily on trade with the U.S.

Gold, which tends to do well when investors are scared, rose sharply. Gold prices were up 2% to $1,300 an ounce, though they had been up even more overnight.

"This is a bit like Brexit," said Ed Yardeni, president of investment advisory Yardeni Research. "The polls indicated a victory for the status quo. Instead, the vote came out with a radical alternative scenario."

Indeed, just a day before the election, the Dow had roared nearly 400 points after the FBI again cleared Clinton in the email investigation. It was the latest evidence that investors were anticipating a victory from Clinton, who represented more stability than Trump.

"People were not positioned for this and that's going to have some aftershocks," said Michael Block, chief market strategist at Rhino Trading.

That explains the dramatic moves for stocks that were seen as big winners or losers in a Clinton White House. For instance, Wall Street raced on Wednesday to buy up shares of biotech and prison companies -- two industries Clinton had singled out for attack. The iShares Nasdaq Biotechnology ETF bounced 5% and drug makers like Shire spiked 9%.

Big banks are also rising amid hopes that Trump will follow through with promises to dial back the Dodd-Frank regulatory reform. Bank of America soared 5%, while JPMorgan Chase gained nearly 4%. Of course, Trump has also called to break up the big banks by bringing back the Glass-Steagall Act.

Defense stocks like Lockheed Martin and Raytheon are flying high as well, a sign that Wall Street is betting Trump and the GOP-led Congress will ramp up military spending.

Likewise, Trump has promised to spend heavily on rebuilding America's infrastructure. That's great news for construction and materials companies like Caterpillar and U.S. Steel, both of which enjoyed big market rallies.

Hospital stocks plummeted amid fears Trump will scale back or even repeal Obamacare, which had provided hospitals with a steady stream of customers. Hospital operators HCA Holdings and Tenet Healthcare plunged 15% and 27%, respectively.

Yardeni said Wall Street is anxiously awaiting more clarity on Trump's policy goals, including ones like tax cuts and cutting regulation that could help the economy. He said others like tariffs, trade deals and mass deportation are "harebrained, and hopefully will be scrapped along the way."

The bond markets were also experiencing volatility. Even though Treasury rates typically fall when investors are nervous in a flight to safety, the 10-year yield actually rose on Wednesday to 1.97%. Longer-term bonds sold off even more, driving the yield of the 30-year up to 2.77%, compared with 2.58% on Election Day.

It's likely a reflection of concerns that Trump's plans to spend heavily could drive up the U.S. debt. Fitch warned on Wednesday that the medium-term impact of Trump's policies "would be negative" for U.S. creditworthiness if implemented in full.