Stopping Trucks from Damaging Bridge a "Nightmare" for Police 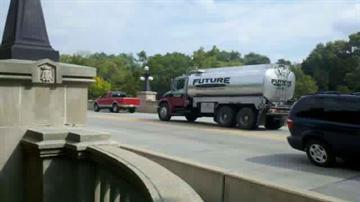 SOUTH BEND, Ind. – Heavy trucks are still driving over the Michigan Street bridge despite restrictions limiting the bridge to vehicles weighing over 10-tons.  The restriction was put in place in August when all four lanes of the bridge were reopened after it had been restricted to two-lanes when crews found cracks on the bridge in June.  Heavier vehicles could potentially cause more damage to the bridge, but keeping them off of it is a tough job.

According to Captain Trent, keeping the heavy trucks off the bridge is difficult because many either ignore or don’t see the signs warning of the weight restriction and when they reach the bridge it’s often too late.

"North or southbound, they're past the point of no return before they know it,” Trent explained.  “Having a semi do a u-turn on Michigan Street, especially southbound Michigan Street where there's a hill, that's not an option either."

The other difficult problem is that the side streets in neighborhoods and parks along the bridge can’t handle trucks trying to navigate around the bridge.  Most of the streets in the area are narrow and residential.

"There's been a lot of traffic over there and a lot of the big trucks trying to go down the side streets which is a little unsafe," described Kristy Thompson, who was at nearby Leeper Park.

South Bend police could ticket the drivers for violating the restriction, but Captain Trent said that wouldn’t be useful since the trucks would’ve already driven over the bridge.

“The damage is done and that’s what we’re trying to avoid,” Trent explained.

Trying to divert the trucks around the bridge before they cross is also difficult once they get closer to the bridge.

"You're stuck either letting them go across or you send a 40 or 80,000-pound vehicle through a residential area," Trent explained.

The Indiana Department of Transportation (INDOT) explained that if the trucks continue to drive over the bridge and cause damage, they may have no choice but to restrict traffic back to two lanes.

South Bend police are looking at options to better diver trucks, one consideration is adding more signs to alert truck drivers that they’re approaching the bridge.  Currently, there are only a handful of signs on either side of the bridge that give drivers enough warning to change their route.

"That is problematic, we could definitely use more use some more signs there,” explained Captain Trent.  “We're stepping up enforcement in that area, we're asking officers to stop and try to at least explain to truck drivers that there's a weight limit on there."

INDOT is working with the South Bend Police Department to improve warning signs and divert traffic.  Both departments say restricting traffic to two lanes would also cause numerous traffic problems.

INDOT is still awaiting test results on samples taken from the bridge to determine the extent of the damage and try to make repairs, they expect results in 3 to 4-weeks.