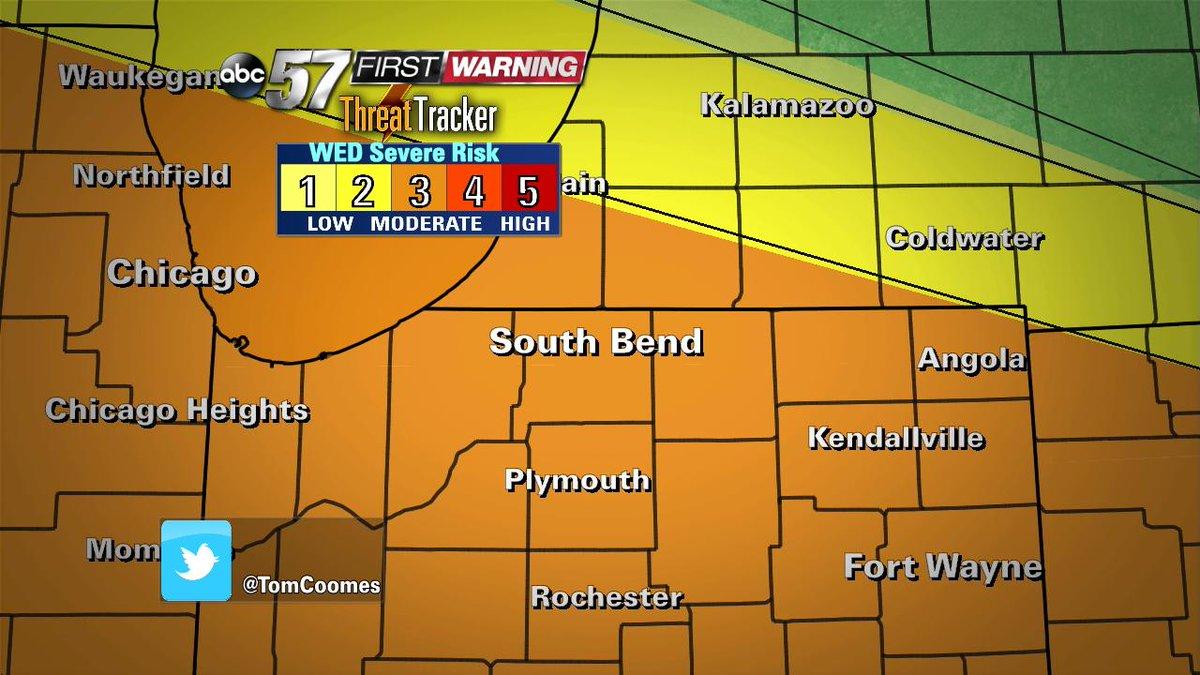 Monday's severe storms may be just an appetizer to the main course midweek. Another round of storms is expected Wednesday, with a one-two punch. The second possibly the most severe.

Around 2:30 Monday afternoon the strongest cell was over Niles producing one inch hail, the first reports of wind damage came in shortly after.

By 3 PM a severe thunderstorm warning was issued for the US-20 corridor from LaPorte to Elkhart. The strongest part of the storm moved over South Bend, Mishawaka and Granger.

Gusty wind, torrential rain and hail rolled through Michiana, this video from Marc tells the storms of the first day of summer in Mishawaka.

The very latest damage reports and pictures after a storm tips through South Bend at 5/6 tonight on @ABC57News pic.twitter.com/VpMjK5PhxI

@TomCoomes I'm no expert...but I think I found the power problem on grape road pic.twitter.com/QvZcAkKkuA

In addition to gusty wind, heavy rain caused minor street flooding from South Bend to Warsaw. Many seeing more than an inch in less than an hour.

Over an inch of rain fell across #SouthBend this afternoon. Kaley Eades shared this video from Mishawaka Ave. pic.twitter.com/8BkGJKpSCV

The next chance for storms is Wednesday, at this time the severe threat is relatively high being more than 48 hours out, a Threat Tracker 3/5 risk. There are still many factors that could limit or heighten severe potential Wednesday evening, the greatest being storms / rain earlier in the day.

Models indicate the the first round of storms will be non-severe around midday Wednesday, accompanying the warm front. The second round could be more severe ahead of the cold front Wednesday night. The big factor will be if rain early in the day "washes-out" the severe threat or clears and allows the threat to build ahead of a strong front. Threats at this time look to be straight line wind, hail and heavy rain. Click here for the latest forecast.