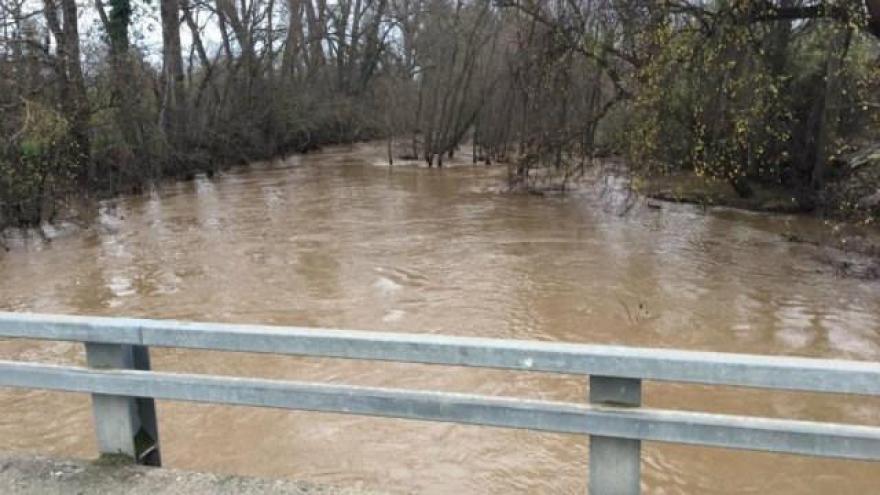 (CNN) -- Parts of California are reeling from winter storms that have triggered flooding, avalanches and forced dozens of people from their homes, but the heavy rain and snow could help ease the drought that has gripped the state.

The storms have dumped more than 7 inches of rain since Monday and the National Weather Service says 6-12 feet of snow have fallen in the Sierra Nevada.

Forecasters expect things to start drying out on Friday.

"Over the next 36 hours we could see around another inch of rain and the mountains could see 12-18 inches of additional snow," said CNN Meteorologist Taylor Ward.

Authorities rescued 49 people in Hollister, California, on Wednesday after a neighborhood was flooded with 3 to 4 feet of water, according to the San Benito County Sheriff's Department. Another 59 people were evacuated.

Farther north, Interstate 80 is closed and some roads have been washed out.

All this precipitation is working its way into the state's lakes and reservoirs after years of drought.

The National Weather Service says Lake Tahoe's volume has grown by about 33.6 billion gallons since the beginning of the year.

Water levels at Folsom Lake, east of Sacramento, have risen 28 feet since Saturday,

Lake Oroville, on the Feather River in Northern California, is up 45 feet.

California Gov. Jerry Brown declared a drought emergency in 2014, saying the state was facing "perhaps the worst drought that California has ever seen since records (began) about 100 years ago.

Please note: The weather is often unpredictable and sometimes dangerous. Please do not expose yourself to a risky or potentially dangerous situation.