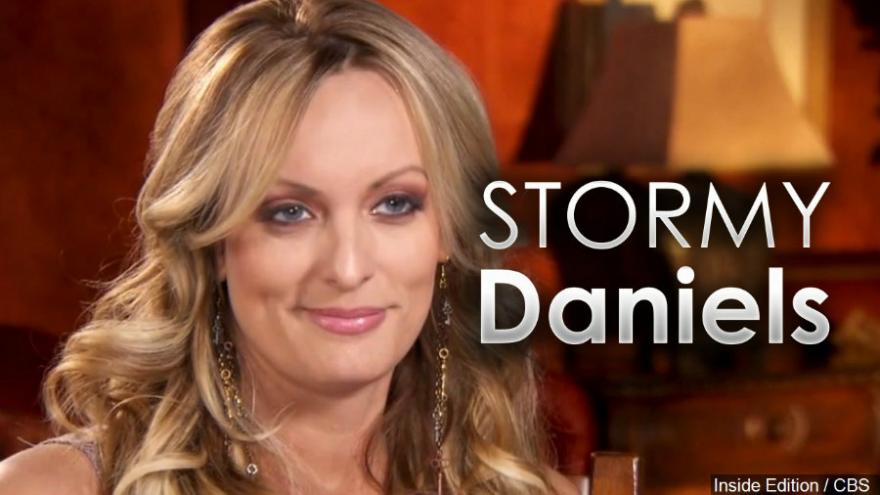 (CNN Money) -- Over the decades "60 Minutes" has featured everyone from CEOs to presidents to whistleblowers to tyrants.

But this Sunday is a first.

America's highest-rated news program is airing an interview with an adult film star known as Stormy Daniels. She was paid hush money by one of President Trump's lawyers before Election Day.

The highly anticipated sit-down is a scoop both for Anderson Cooper, who conducted the interview two weeks ago, and for "60 Minutes" and CBS.

It will air immediately following an NCAA tournament basketball game, which means even more viewers than usual. "60 Minutes" had 10 million viewers last week, according to Nielsen.

Daniels allegedly had an affair with Trump in 2006. Her decision to speak on camera may exacerbate Trump's gender gap -- he has a markedly lower approval rating with women than with men.

"This is going to be a powerful, powerful moment," Baltimore Sun media critic David Zurawik said on CNN's "Reliable Sources."

It's one thing to read about an alleged affair -- it's another thing to see someone speak from the heart about her encounter with the now-president.

CNN viewers saw that a few days ago when Cooper interviewed Karen McDougal, another woman who says she had an affair with Trump around the same time.

Cooper doubles as a CNN anchor and a "60 Minutes" contributor. "60" has been airing on CBS since the early days of television, and it takes great pride in segment producing and editing; Cooper and the producers have been working on the edit of the Stormy story for several days.

What Daniels says will be of interest to campaign finance lawyers, given the mystery around a $130,000 payment she received during the presidential campaign.

"Even though the media does have a tendency to cover this salaciously, to frame this as a sex scandal, it becomes legitimately consequential when we talk about how the Trump Organization potentially acted to cover this up," Sarah Westwood, White House correspondent for the Washington Examiner, said on "Reliable."

The existence of the interview was revealed when Daniels' media-savvy attorney, Michael Avenatti, tweeted out a picture of Daniels and Cooper together.

Ever since then, Avenatti has been hyping the "60" segment.

But CBS has kept quiet. In an unusual move, the network has not released any preview clips, just a single 10-second tease of Cooper asking her a question.

The logic is clear: At this point, practically everyone knows the interview is airing on Sunday, so there's no need to give away any of the newsworthy quotes ahead of time.

Avenatti has said that Daniels was "physically threatened" to stay silent about the alleged affair. He has also said that she has evidence of the relationship.

The details may come out on "60 Minutes." But Avenatti might be trying to lower expectations now. He tweeted on Sunday morning that "not all of our evidence will be mentioned/displayed tonight -- that would be foolish."

He also said "we are not sure what CBS will include but we know a lot from the full interview will have to be cut" due to time constraints.

That's true -- but the Stormy story will be double the length of a typical "60 Minutes" segment. Normally "60" features three stories on an hour-long show. On Sunday, there's only one other story slated to air.

The president is expected to arrive back in Washington, D.C., shortly before "60" airs. His wife Melania will remain at Mar-a-Lago.

"The First Lady will be staying in Florida as is their tradition for spring break," deputy White House press secretary Lindsay Walters said Sunday.

There's already widespread speculation about whether Trump will tweet about the broadcast.

"Trump is such a creature of television. It's not real until he sees it on television. If he watches tonight, he may blow up the Twitter universe," Zurawik said.

Avenatti, for his part, further raised the stakes by saying on Twitter that "tonight is not the end -- it's the beginning."