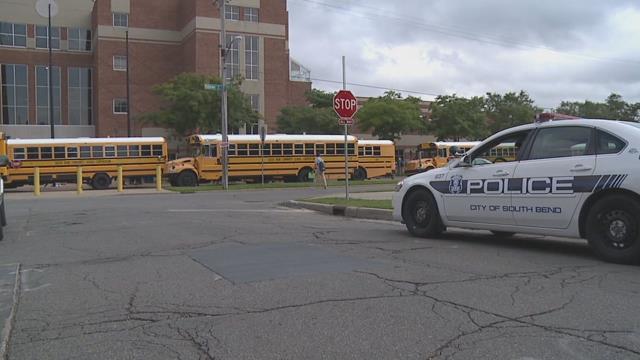 A Riley High School student was arrested Wednesday after allegedly taking a loaded weapon to school, according to a release from the South Bend Community School Corporation.

Wednesday morning several students reported to school officials that while walking home from school Tuesday evening, another student was possibly in possession of a weapon.

The student witnesses were interviewed by school personnel and South Bend Police.

School officials attempted to locate the student, but the student had not yet arrived.

When school personnel and law enforcement began speaking with the student and began a search of the student’s book bag, the student allegedly ran from the school.

The release says police found a loaded weapon was in the bag.

The student was arrested by South Bend Police a short time later.

The district says the student had just transferred to South Bend schools and will now face disciplinary action.

Parents were notified of the incident with an automated phone call after school.

“There should have been a call immediately. So that I would have had the choice to come get my child out of school,” said parent Jennifer Hilleary.

In the release the district wrote at no time were students or staff in danger.

It is important to note that all school personnel took this matter very seriously and acted in a swift manner. The students are to be commended for reporting the concerning behavior to school personnel. At no time today were students or staff in danger. Student safety is of the utmost importance to use. Please continue to talk with your students about school safety, the danger of weapons in school, and the importance of sharing any information with school personnel.