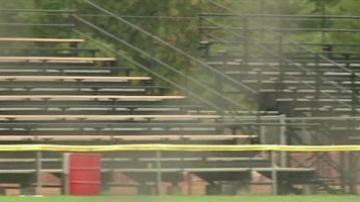 DOWAGIAC, Mich. -- Some students and parents reported to the Dowagiac Schools Resource Officer that they thought a student had a gun at the Dowagiac - Berrien Springs game.

Dowagiac Police say that the student actually had an airsoft gun, which was not loaded.

Some of the students thought it was an actual gun and that got them and school officials very concerned.

“It was crazy, everybody was happy about Michigan State band being there and stuff because they are playing Notre Dame today. And everybody was just really pumped," says Sophomore Gregory Hubbard. "I am over in the student section so I am just yelling and screaming with friends and stuff.”

That is what Sophomore Gregory Hubbard remembers from Friday night's football game at Union High School in Dowagiac.

But Friday night, a student caught the school off-guard by bringing a small airsoft gun with him to watch the game.

Other students saw something in his pocket looking like a gun and immediately reported him to school officials.

“We teach our kids that if something doesn’t feel right to report it, and they did exactly what they are supposed to do," says Principal Matt Severin of Dowagiac Schools.

Principal Severin said that bringing any type of weapon on a school campus is against the handbook, and that includes the football field.

“I think it is important to have students and community members know that it is not appropriate to bring any type of guns, weapons, whether they are real or toys to any type of school event, whether it is school property, football games, or any other events we have,” says Principal Severin.

Fans of Union High Football have mixed opinions on how the situation was handled.

“Well since it is in the rules that you can’t have even the toy guns in school, that was against the rules," says Karen Ausra, mother of three Union High School graduates. "I think they handled it properly.”

“But a toy gun, I think they go overboard with the toys, it was just a toy,” says Amy Lillie, Class of 2006 Union High School Alum.

But students like Gregory say they still feel safe at Union High School.

“I am pretty sure nobody would come to Dowagiac High School with guns and try to shoot up the school, I highly doubt it,” says Hubbard.

The name of the student has not been released.

School officials say the student was released to his parents and he will be under disciplinary action with the school.