Student shot in the head at middle school 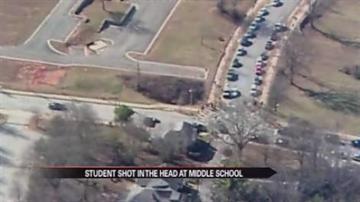 ATLANTA— A 14-year-old boy was shot in the head outside of his school in Atlanta.

The mother of the 14-year-old boy who was shot in the head said the suspected shooter confronted her son and pulled out a gun. The victim then ran and was shot.

The shooting happened just after 2 p.m. Thursday outside of Prince Middle School in Atlanta.

The victim has been identified as Telvis Douglas. He is conscious and is recovering from his injuries.  A teacher was treated for minor injuries.

Atlanta Police have tentatively identified the suspect as another student at the school but no name has been released.