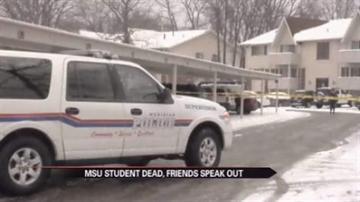 MERIDIAN TOWNSHIP, Mich. -- Friends of a Michigan State University student who was stabbed to death Saturday morning are speaking out.

Andrew Singler was stabbed to death in his apartment in Meridian Township early Saturday morning.

Singler's mom says the suspect in custody is the brother of Singler's girlfriend.

Police have not identified the man yet.

His mother says the two got into an argument when the brother stabbed Singler to death.

"It’s one of those things where you know these things happen, but you never expect it to happen outside your window," said a neighbor.

Twitter has been flooded with messages of love and sadness from the MSU senior's friends.

The murder suspect is in custody and is expected to be arraigned early this week.