Students at IUSB host watch party for State of the Union 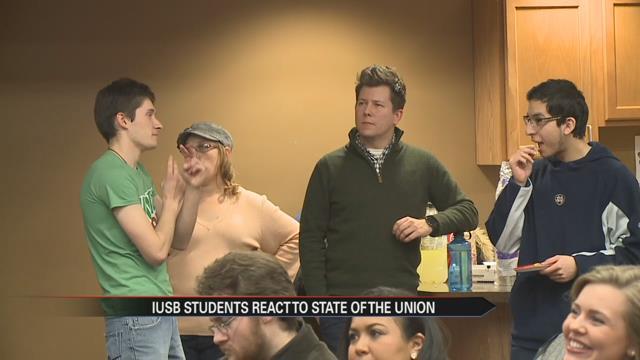 It’s not just Michiana politicians weighing-in on the president’s speech, but also local students. For several years now, Indiana University South Bend has hosted a watch party for the State of the Union.

The  IU South Bend Political Science Club sponsored the event, and it gave some of Michiana’s younger voters a chance to watch, educate and learn more about the State of the Union speech and the state of our nation.

The event took place at the community building – which is part of River Crossing Campus Housing in South Bend. This annual watch party is part of a nationwide organization called the American Democracy Project, which is an initiative focusing on public higher education’s role in preparing the next generation of informed, engaged citizens for our democracy .

Citizens like Rachel Santos who spent the past seven years growing up calling Obama their President.

“My first state of the union address with President Obama, I was in high school. One thing that’s really changed is I didn’t really care that much. And now graduating, I’m really going to be paying attention. I really want to know what he’s saying. It’s important to me now and I realize the effect that some of these speeches have.”

Devonte Glass, a student at IUSB – was jotting down notes during the speech.

“I’m here today because I really want to hear what Obama had to say and what issues he wanted to bring up in the country… and what could better the nation. I’m not so much in to politics so I wanted to be more aware.”

The students were able to connect with other college campuses by using interactive polling as well as tweet their reactions using #ISOTU16.