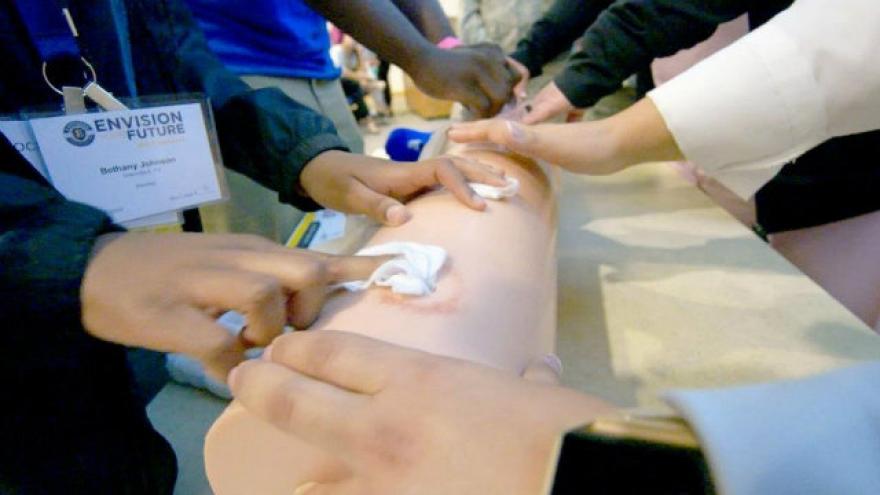 The campaign, Stop the Bleed, readies students with techniques that were once reserved solely for military members, teaching them hands-on training that could help in the case of a possible school shooting. Photo courtesy CNN

(CNN) -- It's a nightmare scenario that's increasingly being viewed as a possibility, especially for students across the United States: emergency medical treatment for massive trauma.

"Let's say you've found someone who's bleeding. You've assessed the situation. You've decided that it's safe for you to enter. You've called for help or assigned somebody to do that. What do you do?" Dr. Habeeba Park, assistant professor of surgery at the University of Maryland School of Medicine, asks while training high school students in skills that she hopes they never have to use. "You're trying to save this person's life."

Park's lessons are part of a campaign called Stop the Bleed, which holds special significance in a year marked by campus violence. In 2018 alone, more than 30 people have been killed in school shootings across the country, including 17 in February at Marjory Stoneman Douglas High School in Parkland, Florida.

Through lectures and hands-on training, instructors teach how to apply tourniquets, pack wounds and keep the situation stable until first responders can arrive. These are techniques that were once reserved solely for members of the military, said Scalea, who is one of the campaign's instructors.

"You hear these things on the news, and you're like, that's sad, but when it's close to you or happening to you, it's a different thing altogether," said Angel Onons, a high school junior student in the Houston area, not far from where 10 people were killed at Santa Fe High School in May.

She got Stop the Bleed certified, which involved participating in a few hours of lectures and demonstrating the skills involved, just ahead of the 2018-19 school year.

"All the things we probably didn't take seriously, because of what happened [at Santa Fe High], we started to take it seriously," Onons said. "Even the drills that we had, it became more intense, and people's emotions were put into everything they were doing."

Stop the Bleed began after the 2012 Sandy Hook Elementary School shooting, in which 20 children and six adults were killed.

"If we go back to Sandy Hook, about a third of those children could have been saved, had we had this operational," Scalea said. "The paramedics aren't going to get there right away."

The campaign -- an initiative of the American College of Surgeons and the Hartford Consensus, a set of recommendations on active shooter and other mass casualty events by one of the association's committees -- aims to provide training and credible information on bleeding control.

Instructors are trained through the program. Anyone can sign up to take classes, which are popular with schools and workplaces.

In a mass-casualty scenario, every second can make a difference.

According to the American College of Surgeons, people with especially severe injuries can bleed to death within five minutes. "This is a disease of time. The clock starts ticking when you get hurt, not when you get to the hospital," Scalea said.

Yassmin Falahat, a Houston-area high school student, is also getting her certification ahead of the new school year. "Kids my age don't really want to think about all the possibilities that can happen," she said. "When you're doing these [lifesaving] things, they could be screaming or yelling and telling you to stop, and you just have to continue."

For 17-year-old Maddison Stueckler, it was the deadly shooting at the Capital Gazette newspaper in Annapolis, Maryland, in June that was on her mind as she too got Stop the Bleed certified. The shooting happened only minutes from where she goes to school.

Scalea agreed: "I never thought we were going to need to do this. But we do. And this is arming the public with power. It's a powerful tool, the ability to save a life."