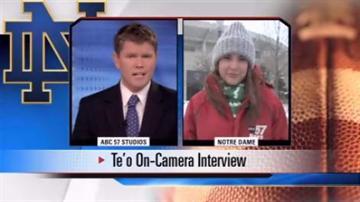 Te’o sat down with Katie Couric to talk about his girlfriend who he believed died of leukemia in September at the same time his grandmother passed away, but Te’o claims that girlfriend never existed.

He told ESPN on Friday he was a victim of a cruel online hoax, which he had nothing to do with.

In a glimpse of Couric’s exclusive interview with Te’o he said he did continue the story longer than he needed to.

“You stuck to the script and you knew that something was amiss Manti,” asked Couric.

This is just a small part of Te’o’s first on-camera interview and students are looking forward to seeing it in full on Thursday.

“He said what he had to say, but I feel like the on-camera interview will be interesting to watch and see how he plays that one,” said Notre Dame sophomore Johnny Fuller.

Fuller said no matter what most students he knows don’t doubt Te’o’s claims. “I think everyone respects and really like Manti Te’o regardless of what happens, so I think everybody that I’ve talked to we automatically give him the benefit of the doubt,” said Fuller. “We have no reason to doubt that he was the victim,” he added.

Others said they weren’t surprised that a hoax like this could happen to a popular athlete.

“I think it’s the last thing any of us were expecting, but I am not surprised that it happened to some college football star who was going on to have a great career, not at all, because people will attract high profile people just to make a name for themselves,” said Notre Dame student Jeff Liptak.

After Liptak watched the clip of Couric’s interview with Te’o, Liptak said he did believe Te’o had kept the story going after he knew something was up.

“To seeing that I think the answer he gave it certainly, I think it’s one where he’s trying to cover himself, but in my opinion the best thing he could of done, when all that occurred, is to just come right out with it,” added Liptak.

Couric’s full interview will be released on "Katie" on Thursday and we will have the latest on ABC 57 News.