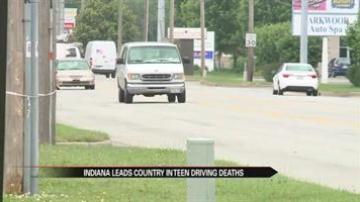 SOUTH BEND, Ind. -- According to a study released by Wallet Hub, Indiana has the most teen driver deaths per licensed teen driver than any other state.

It also says Indiana has the second highest number of teen "under the influence" traffic violations per licensed teen driver.

Teens at Frick's Driving School say they feel comfortable with the basics of driving, but admit they have one distraction that's hard to ignore - their phone.

Bill Wagner has been teaching at Frick's Driving School for more than 40 years.

He says over the years, the hazards of teen driving have evolved.

Hannah Richards is one of his students.

“You can get distracted so easily and there’s so many things about how people are making a post on Facebook or something and then it causes some huge car wreck, I just don’t think it’s worth that," said Richards.

Drivers ed. is not mandatory in the state of Indiana. Wagner says that may be one reason the Hoosier state ranks high on the list of deadly teen crashes.

“When they’re 15 or 16 and they have to drive with mom, dad, big brother, grandparents. When you’re 18 and you’ve got your license and here’s the keys I’m going to a football game, you have no idea how well your son or daughter can drive," said Wagner.