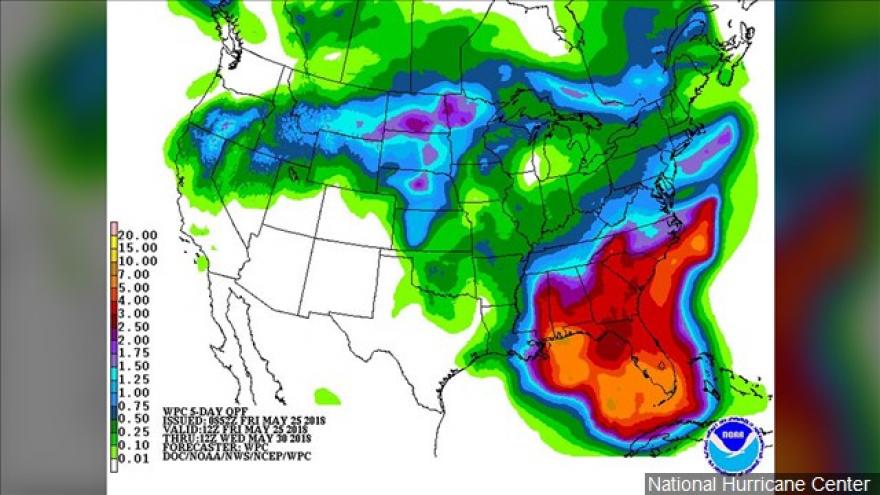 MIAMI (AP) — A storm moving slowly through the Caribbean Sea is threatening to bring heavy rainfall, mudslides, and flash floods to parts of Mexico, Cuba, Florida and the U.S. Gulf Coast this weekend.

Subtropical Storm Alberto — the first named storm of the 2018 hurricane season — was roiling parts of coastal Mexico and Cuba with rip currents and dangerous surf on Saturday. Both countries issued tropical storm watches for portions of their coastlines, with rain totals in some isolated areas of up to 25 inches.

U.S. forecasters followed suit by issuing a tropical storm watch for parts of the Gulf Coast from the Florida Panhandle southwest of Tallahassee to the New Orleans metropolitan area.

At 5 a.m. EDT, the National Hurricane Center in Miami said Alberto was moving north-northeastward toward the Yucatan Channel and was centered about 95 miles (105 kilometers) southeast of Cozumel, Mexico. Its top sustained winds were 40 mph (65 kph). A gradual strengthening was expected through the weekend as it moves north.

The U.S. was expected to start feeling Alberto's effects Saturday. The hurricane center said up to 12 inches of rain was possible across the Florida Keys and southern and southwestern Florida. Residents in the storm's expected path were advised to monitor the storm's progress.

"Flooding potential will increase across this region early next week as Alberto is forecast to slow down after it moves inland," the hurricane center said.

The National Weather Service said a flash flood watch would be in effect from Saturday evening through Tuesday evening for southeastern Mississippi, southwestern Alabama, and the western Florida Panhandle. A storm surge watch was also issued for parts of Florida, Alabama, Mississippi and Louisiana.

A subtropical storm has a less defined and cooler center than a tropical storm, and its strongest winds are found farther from its center. Subtropical storms can develop into tropical storms, which in turn can strengthen into hurricanes. Alberto comes ahead of schedule: the six-month hurricane season doesn't begin until June 1.

Parts of Florida, Georgia, Alabama, Mississippi and Louisiana have already seen heavy rain this week, and further deluges could leave those areas vulnerable to flash flooding and river flooding. Some beachfront and riverfront communities are already handing out sandbags.

The downpours could dampen Memorial Day, the unofficial start of the summer tourist season along Gulf beaches. Along with heavy rains and high winds come rough seas and a threat of rip currents from Florida to Louisiana that can sweep swimmers out to sea.

Red flags warning of dangerous surf conditions are already flying along some beaches. Jordan Sawmiller of Ohio tells WALA-TV that he was approaching the water with caution in Gulf Shores, Alabama.

"It will hit you pretty hard . and it sucks you right back out. So, I don't like getting in there very far," Sawmiller said.

A hotel owner in Panama City Beach, Florida, tells the Panama City News Herald that her family's five hotels are normally full on Memorial Day weekend. But Julie Hilton said people are cancelling because of the weather and room reservations are down about 20 percent.

"Just hopeful that all the peanut stands will be OK, but we may have to replant some peanuts," said Morris.

Only 65 percent of the 2018 Georgia peanut crop has been planted.

"The crop is not growing as well as it should be," said University of Georgia Tifton peanut agronomist Scott Monfort. "So we are getting some cases of yellow peanuts just not growing."