Suicide: The call for help 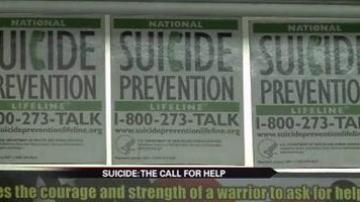 ST JOSEPH COUNTY, Ind. -- In 2011, there were 38 reported suicides in St. Joseph County. At United Way’s 211 call center, they say they answer at least a couple of suicide-related calls a month. Suicide is considered preventable and there is help available if you or a family member needs it.

"Getting somebody just to talk about it and taking them seriously is really important,” said Tracy Schneider, Director Saint Joseph County's Suicide Prevention Center.

The message around suicide is don't be afraid to talk about it.

"Our main message is suicide is preventable,” said Schneider.

It is also common.

"Generally speaking there are twice as many suicides as there are homicides in a year,” said Schneider.

"There were over 38,000 deaths by suicide officially that's what the death certificate says,” said John McIntosh, IUSB Associate Vice Chancellor for Academic Affairs, Professor of Psychology.

McIntosh has been studying suicide for nearly 35 years starting with doctoral work at Notre Dame.

Those with the highest risk are elderly white males.

And the suicide rate is on the increase.

"In these last couple years 2008, 2009, 2010 we've seen a definite increase probably in relation to the economic increase,” said McIntosh.

But there is help.