Summer 2018 could be wet and humid

With June quickly approaching the ABC 57 First Warning Neighborhood Weather Team looks ahead at the latest trends for summer 2018.

Last summer was somewhat unusual in South Bend, high temperatures were near normal but we had few 90 degree days and actually came in well below normal on rainfall. We were muggy but didn’t see much rain, at least officially in South Bend.  Typically in Michiana when a summer is cooler than normal it’s also wetter than normal, dry conditions usually bring higher temperatures. 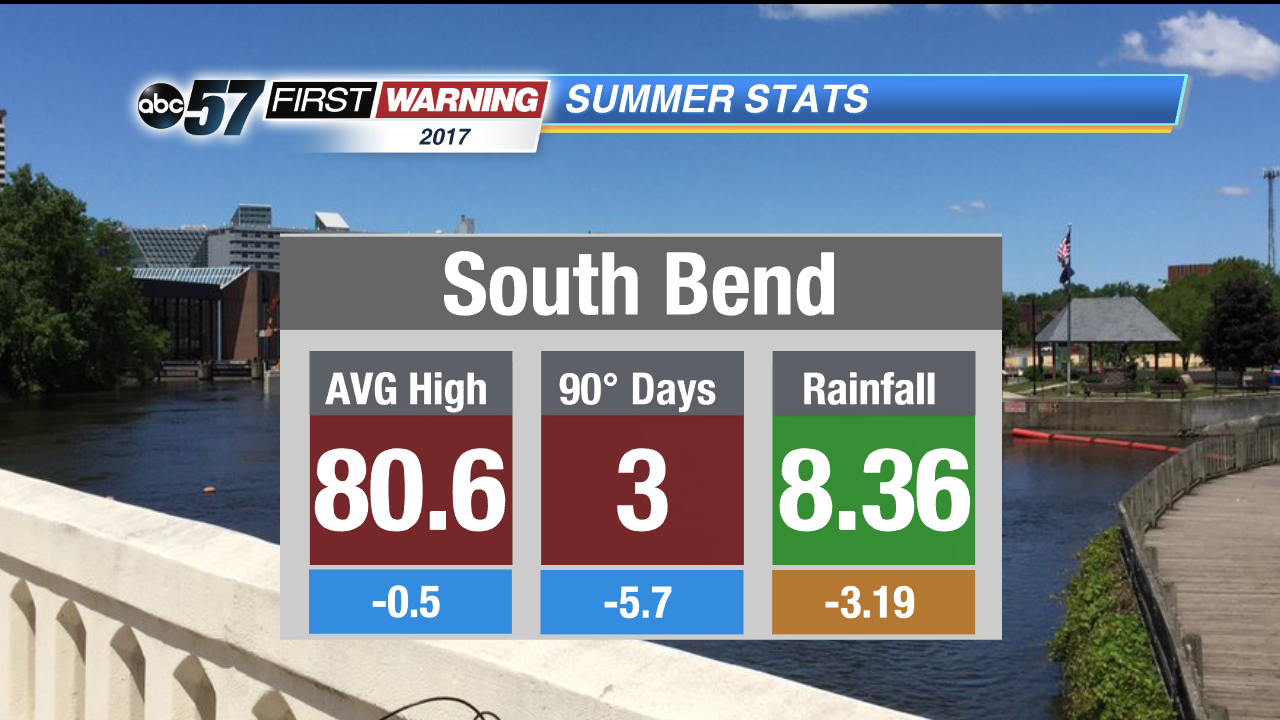 Nationally summer 2018 has some story lines that will continue trends from previous years, hotter and drier in the west and warmer and wetter in the southeast.  Both trends likely worsened and prolonged from the effects of climate change.

For rainfall this summer, most of the western half of the United States could either be drier or wetter than normal. Some small areas could be wetter like the Four Corners region and the Mississippi River Valley, but what is most surprising the Pacific Northwest. They’re expected to be on the dry side once again this year. Going back to the summers of 2017 and 2016, Seattle has been below average and that streak looks to continue this year. 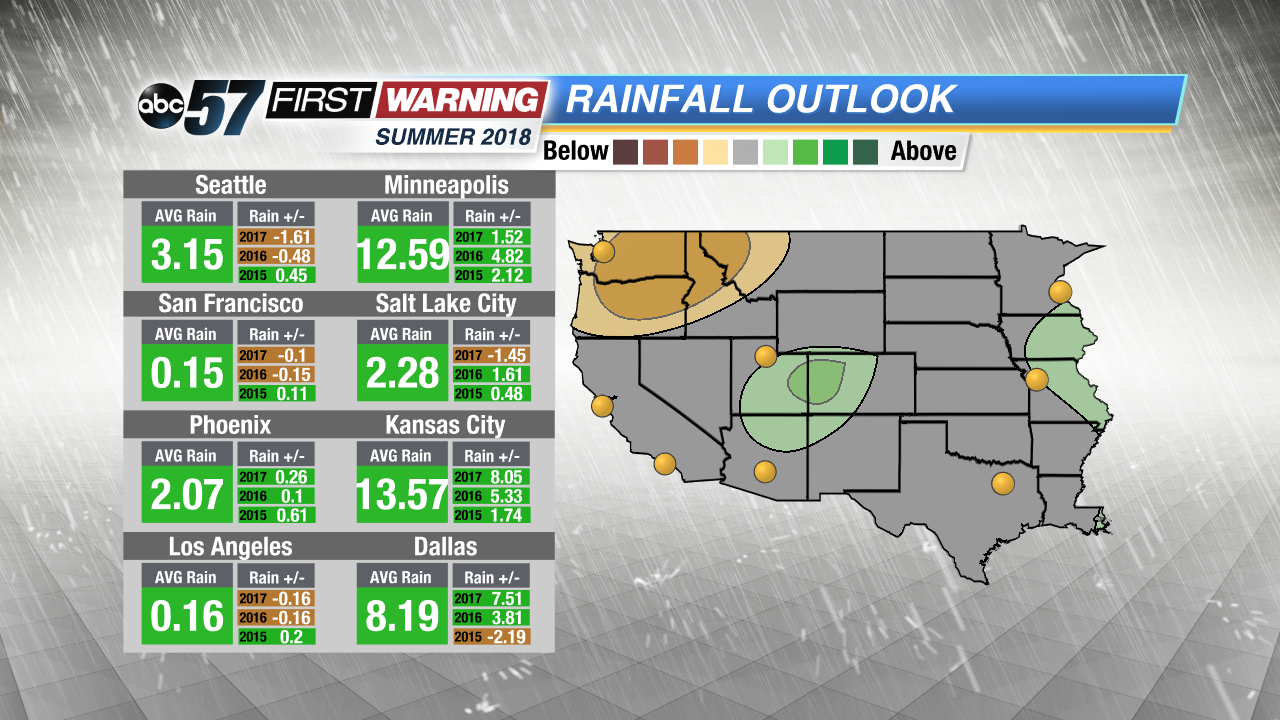 The eastern half is much different. Almost everyone has a good chance of seeing higher rainfall totals than normal. This will most likely be a welcome for some around the New York City area, since they’ve been dry for the last three summers. That’s probably not the case for others such as Miami, New Orleans, and Nashville, who have already seen plenty of rain over the last two years. 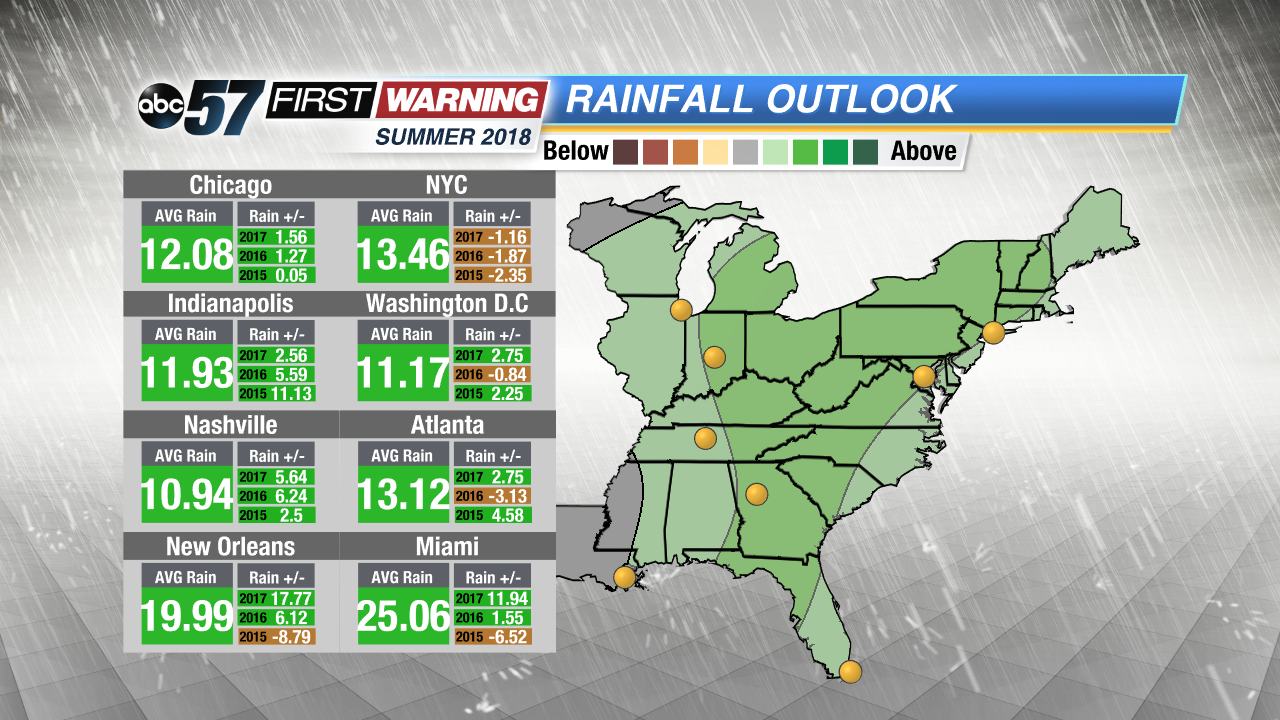 The summer outlook for the western half of the United States features a good chance of above normal temperatures throughout. That has become the norm over the last several summers, including 2015, 2016 and 2017. Of the eight major cities we looked into, only Kansas city and Los Angeles saw two or more summers between 2015 and 2017 with below normal temperatures overall. Seattle, San Francisco, Salt Lake City, phoenix, Minneapolis, and Dallas each saw warmer than average temperatures for two or three of those summers. 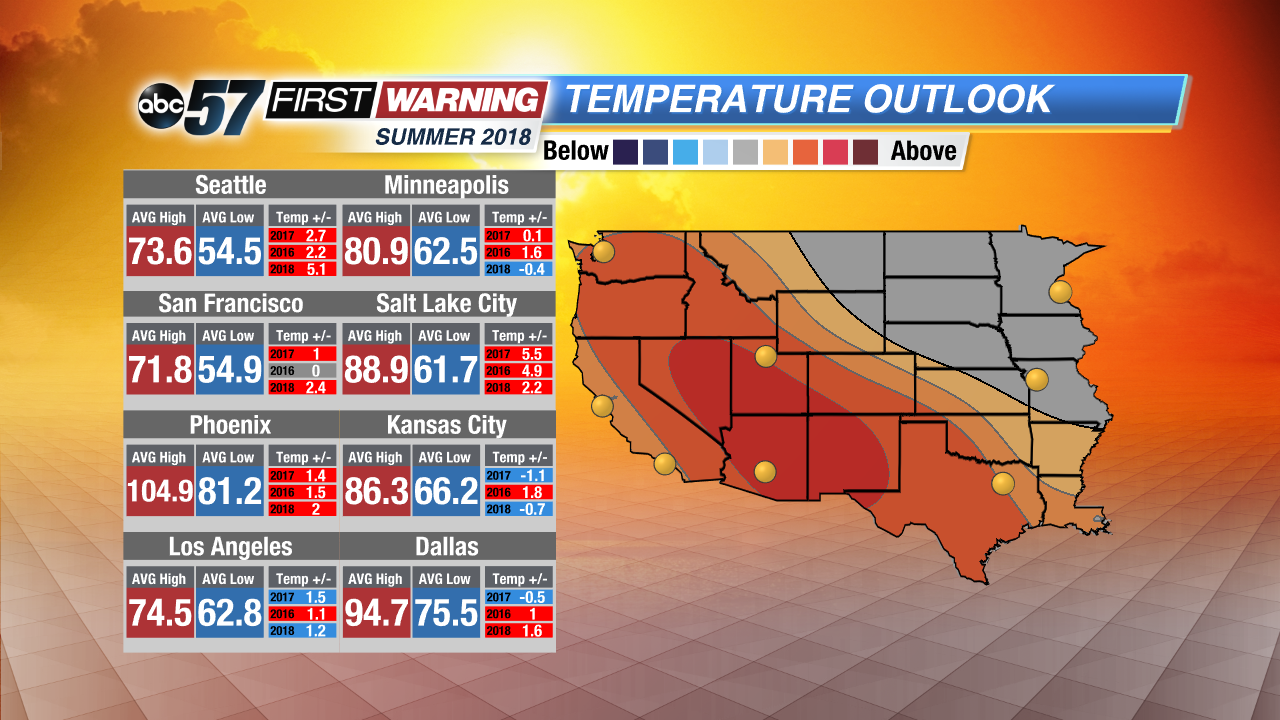 The eastern half of the country is in the same boat. Summer 2018 is expected to feature warmer than normal temperatures for nearly the entire eastern half of the United States. Looking back at the years 2015, 2016 and 2017, Indianapolis is the only major city we looked into that had more than one below normal summer over the course of those three years. Chicago, Nashville, New Orleans, New York City, Washington D.C., Atlanta, and Miami all saw a warmer than average summer at least twice during that three year span. 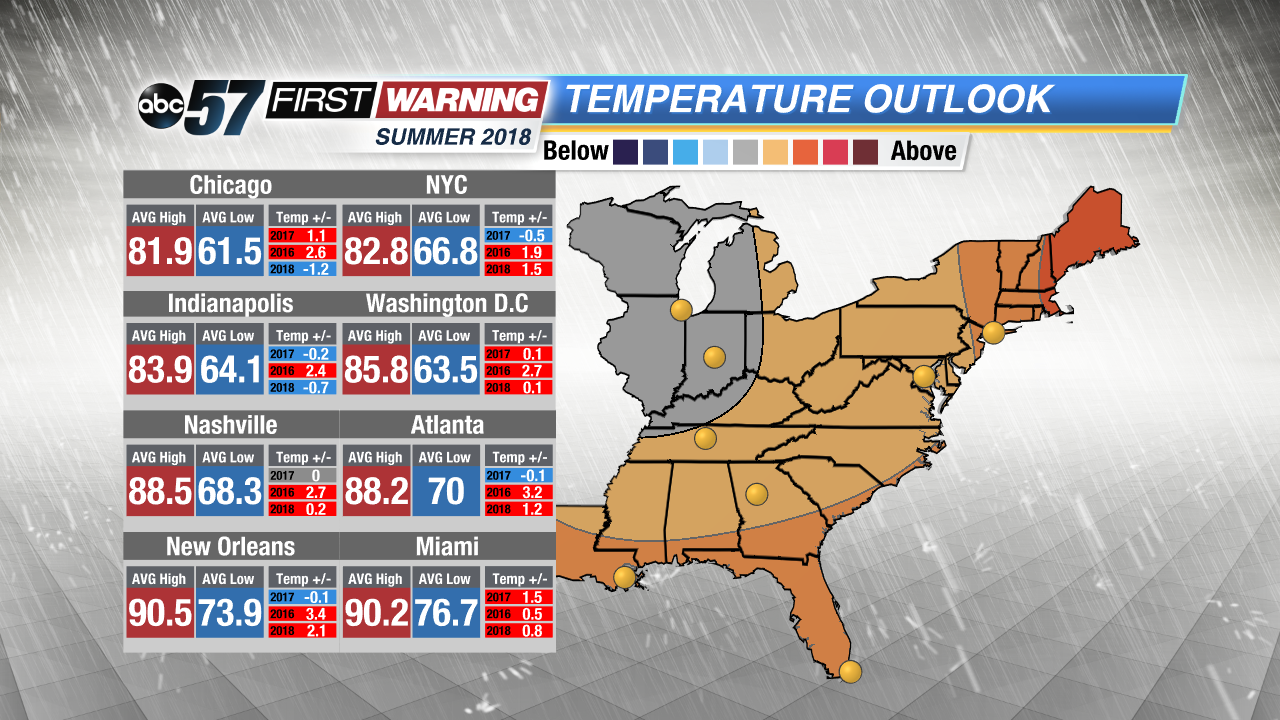 The outlook for the Midwest shows a strong indication for wetter than normal conditions, the average rainfall in South Bend is nearly a foot per summer, the past few season have alternated between dry and wet. 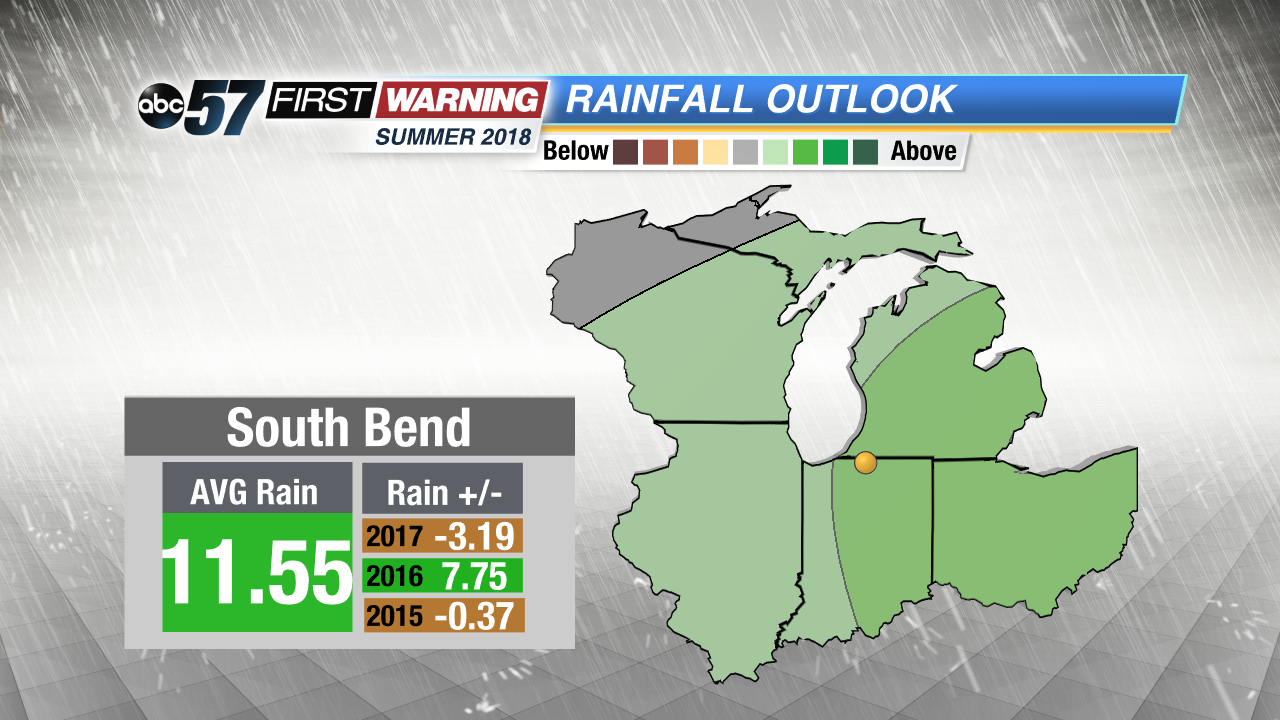 Temperatures show little signal towards warmer or cooler temperatures but that doesn’t mean we won’t have some hot days. Higher humidity can lead to a warmer summer overall because overnight lows trend higher. 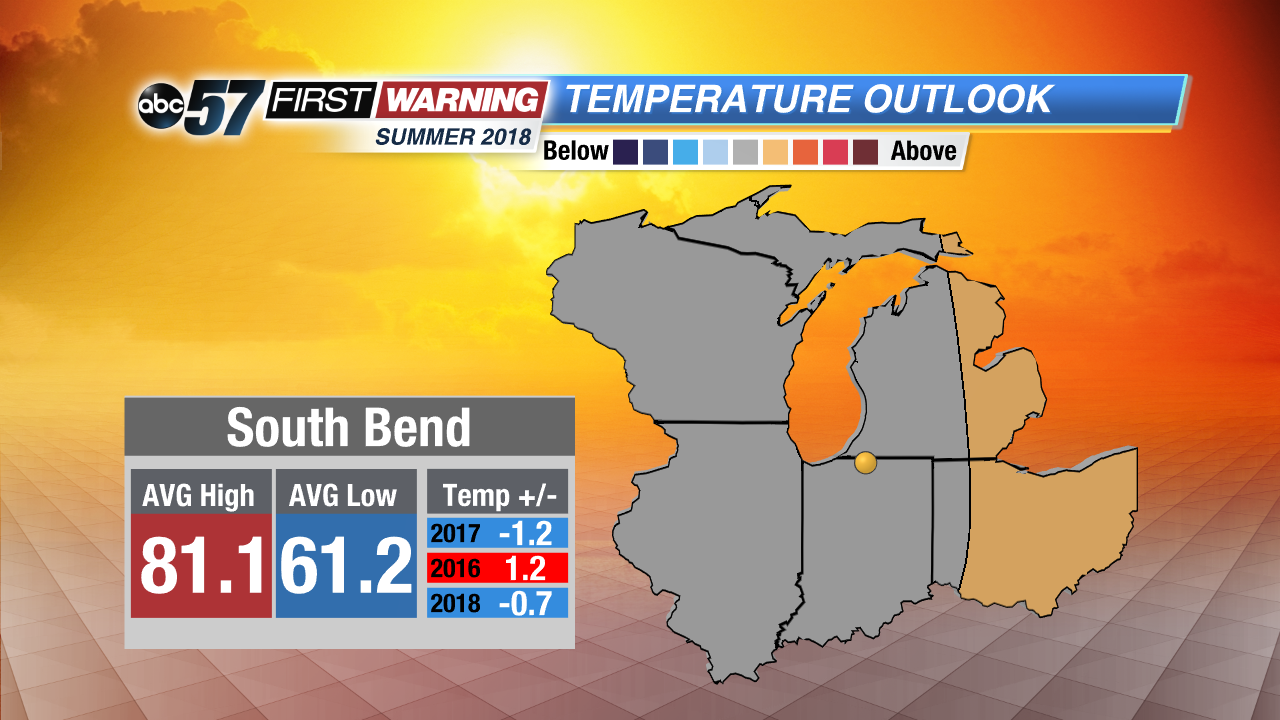 Expect a wetter than normal summer but precipitation can have a big impact on temps as more rain typically keeps highs cooler and muggy conditions keep lows warmer. So highs may not be record breaking but it could be very muggy. 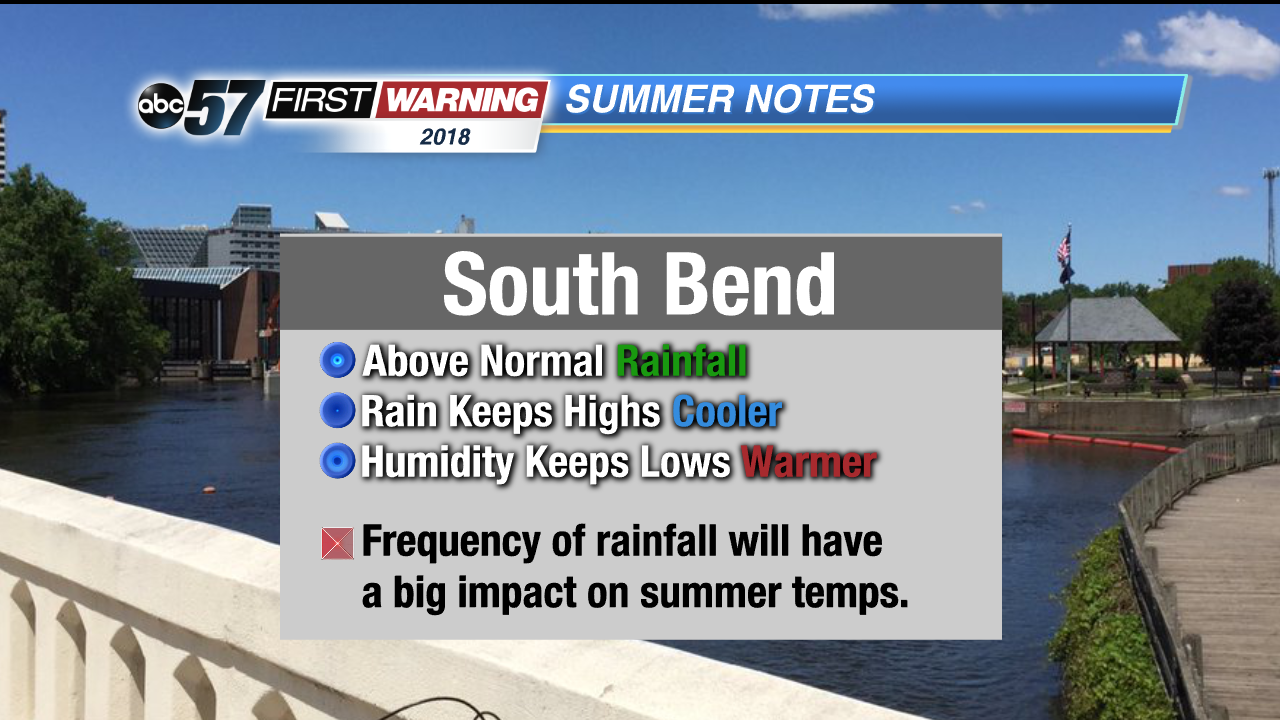