School is starting soon, but there are some cool weather experiments you can try with the kids that they may not learn in the classroom!

The first trick to try: let the crickets tell you the temperature outside. It only requires that you listen to the crickets chirping and do some addition. Grab a stopwatch, and then count the number of cricket chirps you hear over fourteen seconds, and then, add forty. The number you get is the temperature in Fahrenheit. Try it a couple of times and take the average number. 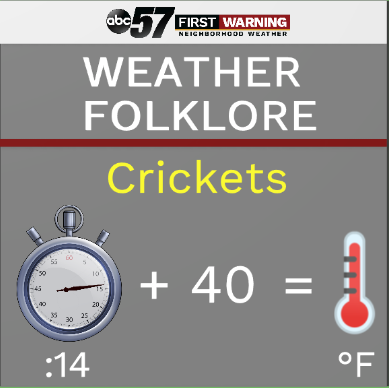 TIPS: This trick will need to be done during the evening and at night when crickets come out. Many people confuse the sound of crickets with the sounds of Katydids. Katydids have a lower pitch chirp that sounds like “she did, she didn’t” repeatedly. Crickets have a much higher tone chirp.

The next experiment is considered folklore. It involves annual cicadas which are nicknamed "dog day cicadas", because they usually come out during the dog days of summer in July and August. According to the folklore, once you start hearing the cicadas regularly, it is a sign that there are six weeks until the first frost. In South Bend, the first frost is normally between September 28th and November 11th. This means that for the trick to work, cicadas will not come out for a couple of weeks. This varies based on where you live, so listen for the cicadas and then mark your prediction for the first thirty-two degree night.