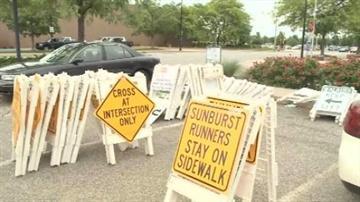 SOUTH BEND, Ind. -- The 30th Annual Sunburst Race kicks off early Saturday morning. Because of the bombings at the Boston Marathon, security will be extra tight this year.

The night before the race, Race Coordinator Theresa Fry is running a marathon of her own.

"There's a lot of preparation that goes on today and through the night tonight which a lot of people don't realize that we have people out on the course in the middle of the night setting up for the runners,” said Fry.

"They can drop things that they would pick up at the stadium before they run. Things like their cell phone, their keys, a sweat shirt, a jacket,” said Fry.

Anything a runner wants taken to the stadium's finish line will be transferred into a Sunburst clear bag.

No personal backpacks or bags are allowed inside the tunnel.

"They can have a camo bag that provides water for our runners or a small fuel belt but they are not allowed to have a backpack, even a string pack come in through the tunnel that way. They will not be allowed in,” said Fry.

Bomb-sniffing dogs, sweepers and zone leaders will monitor the course at all times.

Runners say that puts them at ease.

"I think it's definitely in the back of your mind, especially if you have family out there cheering for you and waiting for you at the finish line,” said Stephanie Myers.

"I'm happy that they are heightening security. Makes me feel better that I am making the decision to get my kids involved in it,” said Amy Murrin.

Murrin will be running the 5K.

Police stress that patience is key.

And for safety reasons-all participants must observe the barricades, cones and signage.

If there is lightning early in the morning, the start of the first race could be delayed by 30 minutes. That would delay every subsequent race.

For timing and security reasons, they will only delay it once. If by the end of the delay time the weather hasn’t improved, they’ll make the decision whether to go on with the race or cancel.