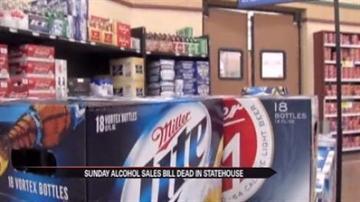 INDIANA. -- A bill to allow Sunday alcohol sales in Indiana has run dry. The chairman of the house committee declared the bill officially dead

Grocery and convenience store owners in favor of lifting the ban say they are disappointed.

"Customers want convenience in the marketplace. They want price competition. They want to do all their shopping on the second-busiest shopping day of the week, and House Bill 1146 would have done that," said Grant Monahan, Indiana Retail Council.

The Indiana Retail Council says the ban is unfair to consumers and costs the state $9 million in lost revenue.