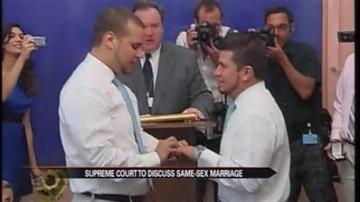 Same-sex marriage is going before the Supreme Court.

The first case is a challenge to California's Proposition-8, a state ban on same-sex marriage. The second case is about the Defense of Marriage Act, the law that denies federal benefits to same-sex couples.

"The question is even when those marriages are legal, can the federal government deny to those legally married couples, benefits that would be available to heterosexual couples," said Stephen Vladeck, American University law professor.

The court could decide whether the constitution grants same-sex couples the right to marry, or if that will be left up to the states.

Both cases will be decided in June.