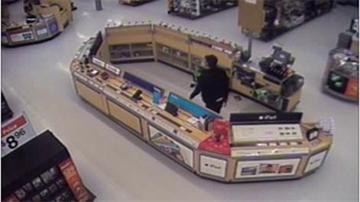 NILES, Mich. -- The Berrien County Sheriff's Department released surveillance video and photos of a suspect in the theft of several iPads from the Walmart in Niles.

According to the Berrien County Sheriff's Department, on January 11 at 12:36 a.m., the suspect walked into the Walmart on 11th Street in Niles and went to the electronics department where he tried to open a case with Apple iPads inside.

He left when an employee entered the area.

The suspect was driving a dark colored sedan and was identified as a Caucasian male with a thin build, approximately in his early to mid 20s, according to deputies.

On January 12, the suspect entered the store at 4:48 a.m. and set baby clothes on fire.

He then went to the electronics department and broke into the case containing iPads. He took several iPads and walked out of the store, according to deputies.

The suspect was driving a dark colored sedan and the suspect was described as a Caucasian male with a thin build possibly in his late teens to mid 20s.

The sheriff's office believes the same man is responsible for both incidents.

The fire caused water damage and forced the store to be closed for several days.