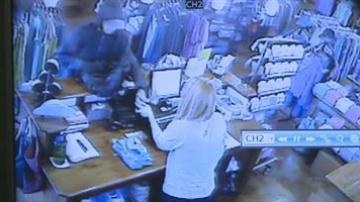 GRANGER, Ind. -- Police are looking for a man they say is responsible for a string of armed robberies in Granger and Mishawaka.

Mishawaka Police are searching for the man seen in surveillance video.

Police describe him as a white, 5'7" male, draped in an overcoat. Officers said he robbed 'Jake's on the Square' in Granger.

The crime happened on Monday in Heritage Square just before 7 p.m.

Store owners say he took $300 and then ran out the backdoor.

Police think he's connected to another armed robbery at 'His and Her's Hair Salon' in Mishawaka.

Before taking the cash, he apologizes stating he needs the money to pay for his child's treatment.