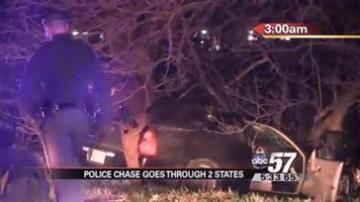 SOUTH BEND, Ind. - It was a wild morning for police, as multiple agencies chased a man through the streets of St Joseph County to Michigan and back.

It started on 9-33 and Cleveland and ended at the Maple Lane Apartments in South Bend.

The High speed chase started around 2:15 Thursday morning. A deputy pulled the man over for running a red light, but when the he saw a pit-bull in the back seat, he stepped back and the suspect took off.

Police say the suspect was going well over 100-miles per hour and was throwing items from his car during the chase. The driver eventually crashed and took off on foot. The chase ended at Red Wing and Bendix.

“ Whatever he threw out the window we are looking for it. Until we further bag them, we’re not quite sure what’s it was” said Officer Carire of the Saint Joseph County Sheriff’s Department.

Carrie also said the suspect  rammed a Michigan State Police Car during the chase. He was found hiding in the doorway of Maple Lane apartments.

They have not found the white pit-bull. Police say after running the plates, that the car belonged to Timothy Evans.