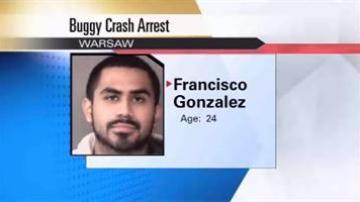 WARSAW, Ind. -- A man suspected of driving drunk and slamming into a horse and buggy is once again free.

The crash happened in Warsaw, Saturday, just north of U.S. 30. Following the accident, Francisco Gonzalez was taken to a Fort Wayne hospital for head injuries then later released, but not into police custody.

Officers caught up with him Tuesday and arrested the 24-year-old.

Five Amish boys were thrown from their wagon during Saturday’s crash. Fortunately they were not seriously hurt. but their horse died instantly.