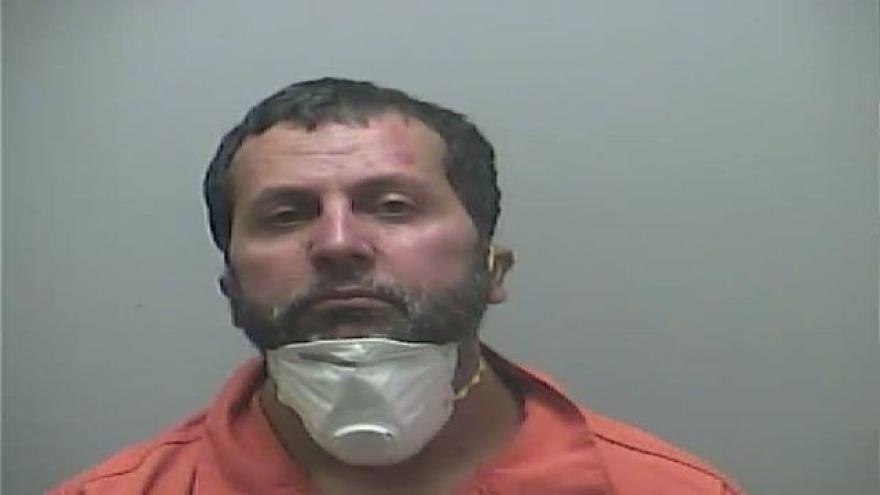 Amor Ftouhi, 49, is currently being held at Midland County Jail in Michigan and was charged on Wednesday, June 21, 2017 with committing violence at an International airport. He allegedly stabbed Lt. Jeff Neville at Flint Airport and may face additional charges as the investigation continues. Photo courtesy Midland County Sheriff 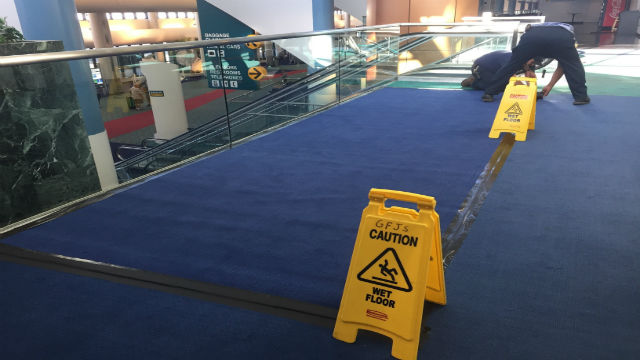 Pictured is the crime scene where a police officer was stabbed Wednesday June 21, 2017 at a Flint, Michigan airport. Passengers were evacuated. CNN

(CNN) -- The man suspected of stabbing a police officer at a Michigan airport was denied a gun purchase in the Flint area within the last five days because he's not from the United States, a law enforcement source told CNN on Thursday.

Amor Ftouhi, 49, a citizen of Canada and Tunisia, has been charged with violence at an international airport, officials said. The FBI is investigating Wednesday's stabbing at Flint's Bishop International Airport as a terrorist act.

"I don't think he was on anyone's radar screen, but we do know he traveled from Canada to New York to Michigan," McCaul told CNN.

The Texas Republican said, "What I think the significance of that is you have someone coming across the northern border from Canada into the United States to try and kill police officers in the homeland." 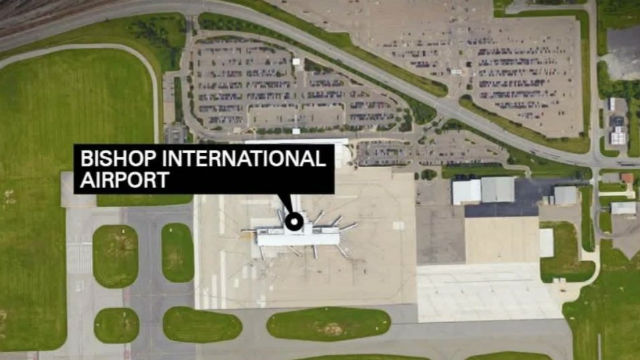 The suspect appears to be as unfamiliar to his neighbors as he was to terror investigators in Canada and the United States.

Authorities said Ftouhi yelled "Allahu akbar" -- "God is the greatest" in Arabic -- and pulled a roughly 12-inch knife with an 8-inch serrated blade and stabbed Lt. Jeff Neville in the neck.

David Gelios, special agent in charge of the Detroit FBI division, said the knife used in the attack was purchased in the United States.

Ftouhi traveled into the United States legally by car at Lake Champlain, New York, last Friday and appeared to have been in Michigan as early as Sunday, according to Gelios. The suspect's vehicle was found at the airport.

Ftouhi lived In Montreal's working-class Saint-Michel district, home to many North African Muslims, with his wife and three children.

Hakeem, an Algerian native who declined to give his last name, said his neighbor was "a kind person," and quiet. Ftouhi largely kept to himself, he said. The neighbor said he would see Ftouhi's children come and go.

"I said hello going up and down the stairs," Hakeem told CNN on Thursday. "We were neighborly."

Next-door neighbor Joassaint Guillaubert said he recalled hearing children running around, but did not know they were Ftouhi's children.

Both said they never saw the suspect's wife.

He was not on US or Canadian radar

The suspect was made to wear a spit-guard face mask at a hearing Wednesday after spitting in the face of a Flint police officer, according to a law enforcement official.

He was ordered to remain in custody pending a full detention hearing next week.

Ftouhi has lived in Montreal for 10 years, according to a pretrial services officer at his hearing. He worked on and off as a truck driver until about two weeks ago. His mother, three sisters and two brothers live in Tunisia; another sister resides in Switzerland.

Ftouhi understands and speaks some English, but is mostly fluent in French.

"My first name is Amor and my last name is Ftouhi," he told the court.

US Magistrate Judge Stephanie Dawkins Davis assigned a federal public defender to represent the suspect. Asked whether the information on his financial affidavit was truthful, Ftouhi the judge: "Yes, I tell the truth."

A law enforcement source told CNN that Ftouhi was not on the radar of US or Canadian authorities but said they were trying to determine whether he used an alias.

The Canadian Office of the Minister of Public Safety and Emergency Preparedness condemned what it called a "heinous and cowardly attack."

Ftouhi could face up to 20 years in prison and more charges could be added, officials said. It wasn't immediately clear whether Ftouhi had an attorney.

On Wednesday morning, Ftouhi arrived at the Flint airport carrying two bags. For about 40 minutes he lingered in the airport's public areas -- including a restaurant and a bathroom, where he dropped his bags -- before the attack, a criminal complaint said.

After wounding Neville, Ftouhi continued to yell "Allah" several times, followed by something similar to "you have killed people in Syria, Iraq and Afghanistan, and we are all going to die," the complaint said.

"Lt. Neville got him to stop stabbing him," said Chief Chris Miller of the Bishop Airport Safety Division, who was nearby and able to handcuff Ftouhi.

An FBI special agent said Ftouhi then asked the officer why he did not kill him, the complaint said.

Neville was "doing very well," airport Director Craig WIlliams said Thursday. He has worked at the airport since 2001, rising to the rank of lieutenant in 2006.

"He's a great guy," Williams told reporters. "He's well-loved by everybody just for his personality, his professionalism. He treats everybody with respect."

Genesee County District 5 Commissioner Mark Young said he spoke with Neville and his family at the hospital.

"He was talking and communicating well, but in quite a bit of pain following the surgery ... (he) seems to be doing well," he said. Neville retired from the Genesee County Sheriff's Office after 20 years on the job, Young said.

A airport maintenance worker who was speaking with Neville suffered arm injuries while helping to subdue the suspect. The employee was taken to the hospital and was later released.

"I'm not afraid to say I think he saved Jeff's life," Williams said. "He jumped up there and did something that is courageous."

'We view him as a lone-wolf attacker'

Fthoui seemed to have acted alone and had no specialized training, officials said.

"Time will tell over the next several days whether anyone had any knowledge of this, but at this time we view him as a lone-wolf attacker," Gelios said. "We have no information to suggest a wider plot."

Authorities interviewed Fthoui extensively after the attack and said the stabbing appears to have targeted law enforcement.

"I think it's sufficient to say he has a hatred for the United States and a variety of other things, which in part motivated him toward coming to the airport (Wednesday) to conduct this act of violence," the FBI special agent said.

President Donald Trump was briefed on the attack, an administration official told CNN.

The Flint Islamic Center condemned the attack and urged the community to unite "against such senseless" violence.

"We here in Flint are a resilient community; we understand what it means to stand together, to struggle together, to protect one another, and to overcome together," said Mohammed Saleem, president of the center's management committee.

"We will not allow others with their own political agendas to divide us."