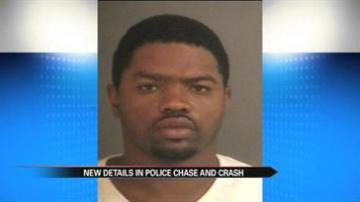 ST. JOSEPH COUNTY, Ind. -- The man accused of fleeing from police and striking a pedestrian has been charged in the case.

Clester Burt III, 34, is under police surveillance at the hospital.

According to court records, a South Bend Police officer attempted to pull over Burt's maroon Cadillac near the intersection of Fellows and Woodside.

The driver of the Cadillac did not stop, but led the officer on a brief chase. It ended at High Street and Ewing when the Cadillac struck a vehicle and pedestrian Lucky Weah, who was walking home from work.

Right after he was hit, Weah was handcuffed by police.

"This was definitely one of those situations. He was in the wrong place at the wrong time," said Garnaat.

Garnaat visited Weah at the hospital Wednesday afternoon. She says he is still upset about what happened.

"He was injured and he laid there for quite a while before the ambulance--45 minutes-- according to his estimation anyway and treated roughly and he's upset by that," said Garnaat.

"Lucky did admit that the police did apologize later for the misunderstanding, but I think he still was pretty hurt by the whole situation," said Garnaat.

"He's got a lot of support from folks, from the church, from people with whom he works," said Garnaat.

Garnaat says Weah is originally from the Ivory Coast and recently became a United States citizen.

She says he now works for a bus company in Nappannee.

He's worried about loss of pay--so the church is trying to raise money to help.

"People can, if they would like to help him- it's basically for daily life, they can send donations to the "Lucky fund" at Southside Christian Church," said Garnaat.

He's facing four counts including not having a license, causing serious bodily injury while operating a motor vehicle while intoxicated, leaving the scene of an accident, and resisting law enforcement.