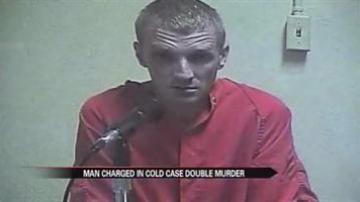 A 28-year-old man was arraigned on two counts of first degree felony murder Thursday morning for the February 2010 deaths of Carolyn and John Tarwacki of Niles, Michigan.

During a press conference with investigators and the prosecutors involved in the case, a few details of the case were revealed.

Suspect Keith James Lintz’s name first came up during the first week of the investigation as a tip to the task force.

Detectives conducted 381 interviews across four states during their investigation.

They said Lintz made comments to others that were helpful in their investigation.

Investigators would not discuss specifics of the case but did say that Lintz lived in the same general neighborhood as the victims.

Lintz was arrested Wednesday afternoon. Detectives said he was just leaving his grandmother’s house in a vehicle and a traffic stop was conducted. He was taken into custody without incident.
Lintz’s next court dates are October 31st and November 1st.

Investigators are still looking for witnesses and people who can assist with the case. If you have any information call 269-683-4411.