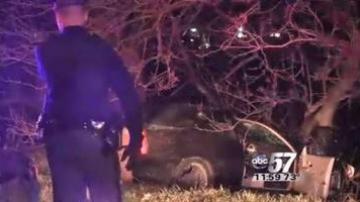 ST. JOSEPH COUNTY, Ind. -- One man is now in police custody after officers said he led them on a high speed chase through the streets of St. Joseph County to Michigan, and then back!

Deputies said they pulled over Timothy Evans for running a red light, then realized he had a pitbull in the backseat.

When the officer stepped back, the suspect took off!

During the chase, he crashed his car, got out, and ran!

He was later found hiding at the Maple Lane apartment complex in South Bend.

There is no word yet on what happened to Evans' dog.