Suspects hold mom with infant at gunpoint during home invasion 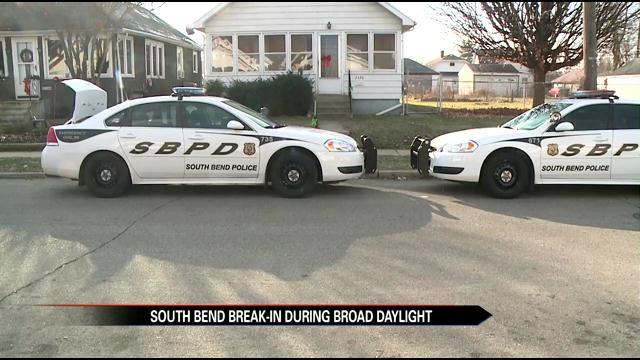 Two men with guns invaded kicked down the door of a home on Roberts Street in South Bend around 10 a.m. Monday. A woman was home alone with her infant at the time.

The victim said the suspects pushed her to the floor, stuck a gun in her face, and then called someone on a cell phone saying 'We've got the wrong people.'

The victim said she's lived at the home on Roberts Street for barely a month.

Police said the men were wearing hooded shirts to conceal their faces.

"By the time I tried to get to the door, they had already kicked it in, and was running in at me with a gun.”

The mother asked that we hide her identity because she is scared. She said she couldn't see their faces.

"No I just seen gun. They were pointing it straight at me at my face.”

She said her 6-week-old daughter was crying in the bedroom when they told her to stay still on the floor.

She asked if she could console the baby and the intruder let her get the infant, and then told her to stay in the back bedroom.

She said they kept asking for people she didn't know.

She's happy they didn't hurt her or her newborn.

"They just kept saying be quiet, don't cry, and stuff like that. And 'We was lookin for people' and this and that. And that they have bills to pay. But my thing is when he was leaving, he told me to call the police and make a report because my door was messed up.”

She said they stole three flat screen TVs, an XBox, and some games. Police believe the two suspects fled in a vehicle that was parked in the alley behind the home.

The ordeal lasted between 10 and 15 minutes.

Lieutenant Anthony Bontrager said they are following up on leads.

Bontrager said, "If you get the wrong person breaking in, you don't know what they're capable of doing, so every one of those cases concerns me especially when there's a child involved.”

The victim said the suspects asked her for her cell phone and made a call on it, but didn't take it.

If you have any tips on this home invasion, call the South Bend Police Department.