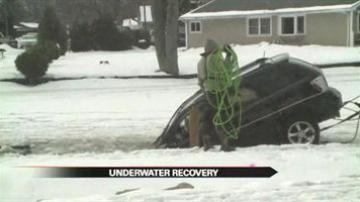 COLOMA, Mich. -- An alleged drunk driver drove her SUV onto a frozen channel of Paw Paw Lake in Coloma early Wednesday morning. On Friday, crews went out to recover the submerged SUV.

A witness told police the woman drove through a yard, around a wooden dock, over a concrete barrier and onto the frozen channel.

She allegedly drove about 100-feet, turned around and drove about 200-feet in the other direction, according to the witness.

As the vehicle exited the channel and onto Paw Paw Lake, the vehicle crashed through the frozen water into the lake.

The witness helped the woman from the water.

The woman was arrested for OWI.

Her SUV has been under 15 feet of water ever since.

Rich Lenardson of Great Lakes Towing was called in to help recover the vehicle.

The ice didn't make it easy.

The last couple of weeks, temperatures have gone up and down, causing some of the ice to melt.

Lenardson says it's not as common to find vehicles that have broken through the ice in this part of Michigan.

"This far south in Michigan, it's not so common. Up north, you get vehicles going through a little more, because of ice fishermen; that wasn't the case with this one," said Lenardson.

Divers attempted to float the vehicle in hopes of dragging it across the surface, but its weight was too much.

Because of the V-shaped channel, pulling it from underneath wasn't an option either.

"It probably would've rolled over a few times. It would've been in a lot worse shape - I mean - it's a total no matter what, but to pull it under the ice isn't really a good option," said Lenardson.

Emergency responders say you should be especially cautious around ice because it will only become more unstable.