Swimmer who jumped from St. Joe pier could face charges 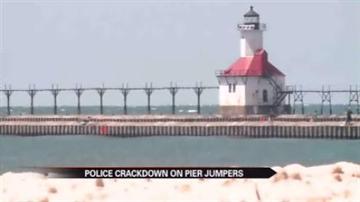 ST. JOSEPH, Mich. -- It's not unusual to see swimmers jumping from the pier in St. Joseph, Michigan, but after an incident Sunday, one swimmer may face charges.

Fun in the sun came to a sudden halt Sunday at Silver Beach.

A man jumped off the pier into the boat channel, instead of jumping lakeside like most people.

"The port is where all the boats come and go and we had a person jump into the water and try to swim across the Federal Channel, and had some problems which our Marine Division had to respond to and bring him out of the water,” said Sheriff Paul Bailey of the Berrien County Sheriff's Office.

Two friends saw he was struggling and jumped in after him.

"Anytime you jump into that water, everybody's at risk. And then it takes the Coast Guard and our personnel, puts them at risk because when they get there, there's a possibility we'll have to go into the water to try to save them,” said Bailey.

This is the first time the sheriff has ever heard of this happening.

He wants to make sure it doesn't happen again.

"We want to send a strong message out that if you're going to jump in that channel, we're going to try to stop that by seeing if the Prosecutor's Office will charge people with disorderly person,” said Bailey.

He urges swimmers to be smart.

"We just encourage people to be safe when they go enjoy Lake Michigan. Understand the risks, understand what Lake Michigan's like with the riptides that come occasionally and they should read up on that before they come and enjoy the lake,” said Bailey.

Sheriff Bailey said paperwork has been handed over to the Berrien County Prosecutor's Office to see if charges can be brought against the jumper.