Swoop 'high-fives' his way into the ABC 57 studio 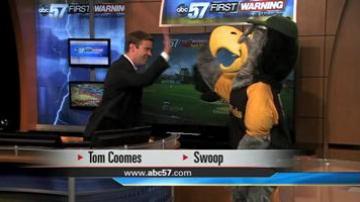 Right now people across the city are joining in on the Hunt for the Silver Ticket.

Here's how it works:

You can follow the Silver Hawks on Facebook and Twitter. A clue will be posted on those sites to where a Silver Ticket may be located.

If you find a Silver Ticket you can show it at the Four Winds Field Box Office on Opening Night.

Then you'll get four complimentary tickets to the game.

There will be more prizes given away on Opening Night along with a fireworks show.

The team is also guaranteeing great weather for that first night at the ballpark.

The Silver Hawks are guaranteeing 50 plus degree weather on April 8th.

If the temps fall below 50 when the gates open, anyone that bought tickets between March 12th and April 1st will get a free ticket to a 2014 regular season game.