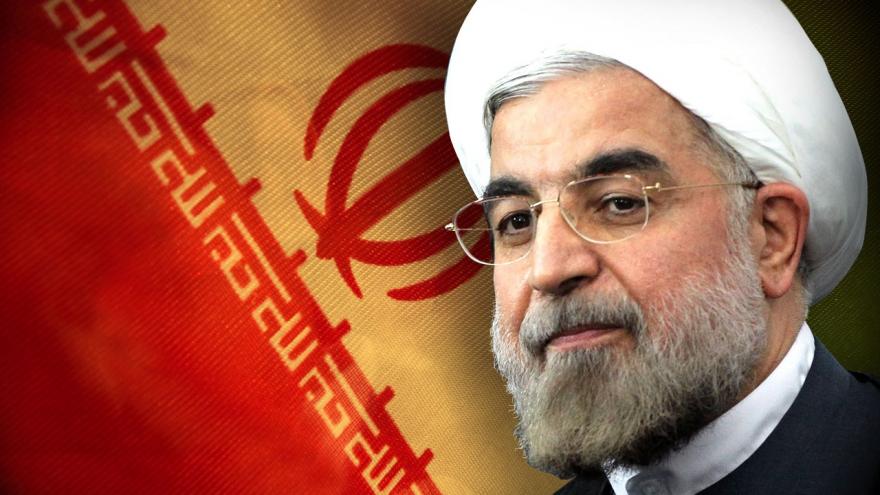 (CNN) -- Iranian President Hassan Rouhani was sworn in for a second term Saturday in front of more than 100 foreign dignitaries as he accused the United States of undermining the 2015 nuclear agreement between Iran and the major world powers.

Rouhani was a key architect of the 2015 nuclear agreement with the United States, the European Union and other partners, known officially as the Joint Comprehensive Plan of Action.

The deal led to the lifting of most international sanctions against Iran in return for curbs on its nuclear program.

"The actions of the US regarding the implementation show that the US can't be trusted," Rouhani said. "The world should know that any abrogation pertaining to the agreement would face the unanimous reaction of the nation and the government of Iran."

In what appeared to be a direct dig at President Donald Trump, Rouhani said, "We do not wish to engage with those who are newcomers to the political arena but wish to tell the veteran politicians and diplomats we can maintain and continue working in the framework of the joint plan.

"Those who wish to tear it apart must know they are cutting short and tearing apart their own political life and the world shall not forget such negative actions."

Last month the United States announced new sanctions against entities and individuals with ties to Iran, a day after certifying the Iranian government's compliance with the nuclear agreement.

Before the inauguration ceremony, Iranian officials urged European countries not to ally themselves on this issue with Trump, according to news agency reports. EU foreign policy chief Federica Mogherini was among the attendees at Saturday's ceremony in Iran.

In a statement, the EU said that Mogherini "reiterated the EU's unwavering commitment to the deal, recalled its historic significance, multilateral dimension and its importance for regional and global stability." She underlined the need for a full and effective implementation of the deal by all parties throughout its duration.

Following the swearing-in, Rouhani has two weeks to submit his new Cabinet to the parliament for a vote of confidence, according to the semi-official Tasnim News Agency.

The lawmakers will then assess the programs of the proposed ministerial picks for a week before holding an open session for the vote of confidence.

Rouhani made it clear he intended to keep Iran on the path of "reform and not stagnation."

He was decisively re-elected in May with around 57% of the vote. He'll serve another four years.

Separately, Russian state media are reporting Russia and Iran have agreed to strengthen military, technical and technological cooperation following the new US sanctions.

Russian state media reported a source in Rogozin's office said the parties "have reached a tentative agreement to increase military and technical and technological cooperation after both countries have been included to the sanctions list."