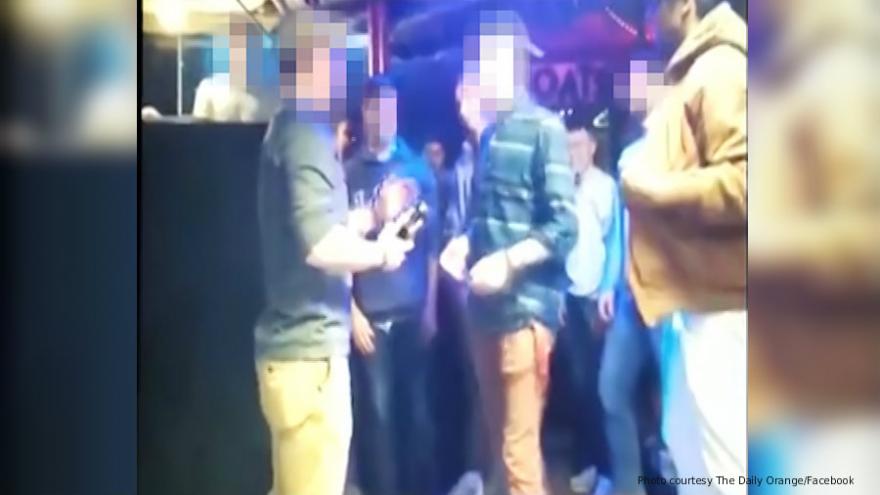 Chancellor Kent Syverud called the behavior "offensive" in a statement to the campus community Wednesday.

"They include words and behaviors that are extremely racist, anti-Semitic, homophobic, sexist, and hostile to people with disabilities," Syverud said.

The Syracuse fraternity apologized: "Anyone of color or of any marginalized group who has seen this video has every right to be angry and upset with the despicable contents of that video."

The racist video had been part of a skit to roast an active brother, who is a conservative Republican, it said in the statement.

"The new members roasted him by playing the part of a racist conservative character. It was a satirical sketch of an uneducated, racist, homophobic, misogynist, sexist, ableist and intolerant person," according to the fraternity. "The young man playing the part of this character nor the young man being roasted do not hold any of the horrible views espoused as a part of that sketch."

It added that the group wasn't trying to make excuses for the content, but wanted to tell the context around the video.

"We cannot apologize enough for the pain, sadness and fear that this has caused," it stated.

The Daily Orange, an independent newspaper run by Syracuse University students, obtained and posted one video in which a fraternity member makes another one swear to hold onto hatred for African-Americans, Hispanics and Jews, using racial slurs for those groups.

Later, another student, using a derogatory word for Jews, makes a veiled reference to gas chambers in Nazi Germany.

CNN has not independently verified the authenticity of the video the newspaper posted. The paper said videos were posted in a secret Facebook group. The university has not released any videos.

"This conduct is deeply harmful and contrary to the values and community standards we expect of our students," Syverud said. "There is absolutely no place at Syracuse University for behavior or language that degrades any individual or group's race, ethnicity, sexuality, gender identity, disability or religious beliefs."

After confirming the fraternity's involvement, the school's Office of Student Rights and Responsibilities suspended the chapter, Syverud said. All evidence was sent to the Department of Public Safety, which is working to identify the members and pursue "additional legal and disciplinary action," he said.

The fraternity stated: "None of the satire was said or done in malice."

"That said, many bright lines were obviously crossed. The language used in this sketch is disgraceful, and it made the active brothers very uncomfortable."

It said the organization would never demand new members to recite the kind of language in the video and that the fraternity was not a place of hate.

Theta Tau's central office also condemned the actions of those in the video as "truly disgraceful."

"It was revealed that the video was a parody, skit, or roast of the active brothers by a pledge class, and not Chapter members hazing, humiliating, or disparaging its pledges as the university had described to our Central Office. However, this does not excuse the behavior," it said in a statement.

The central office vowed to take action based on findings from an investigation.

On Wednesday night, hundreds of students turned out to protest at the chancellor's office, according to CNN affiliate WSYR, before moving to a chapel on the upstate New York campus, where they shared accounts of discrimination they had faced at the school. And they demanded that university officials release the videos.

"From the testimonies that I have personally heard today, it is completely clear that this is one in a great many of unspoken events, and the only reason that this really got started today is that somebody got caught on tape," Syracuse student Colin Mackenzie told WSYR.